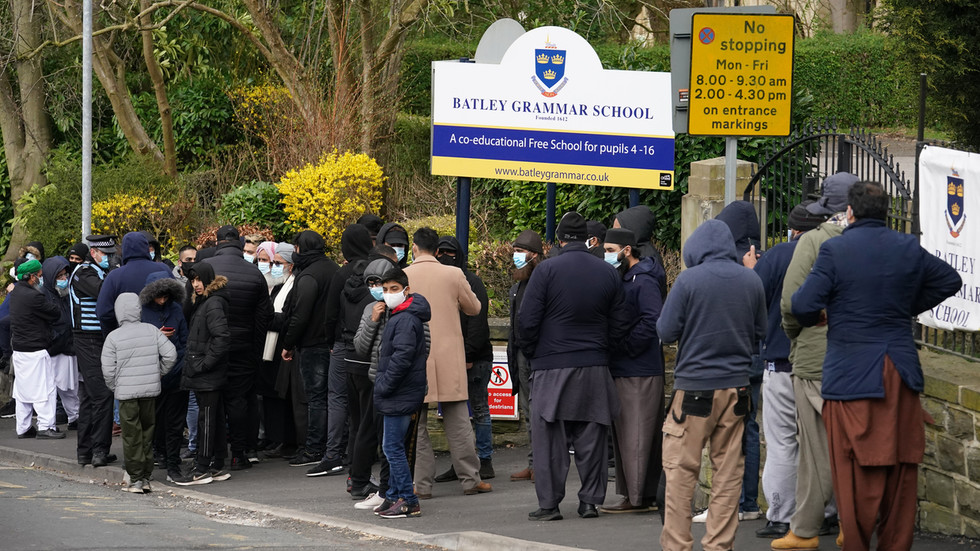 Minister ‘disturbed’ by school protest over Prophet Mohammed cartoon, says teachers should not be ‘intimidated’

The UK communities secretary has raised his concerns over a demonstration that took place at a school in West Yorkshire, after a teacher allegedly showed a cartoon of the Prophet Mohammed during a religious studies lesson.

Speaking on Friday, Communities Secretary Robert Jenrick told Sky News that the Department for Education had been in touch with the school and the local council, and an investigation into the teacher’s conduct was the right way to proceed.

However, Jenrick said he was “disturbed” by events on Thursday, when parents and angry locals gathered to “defend the honour of our Prophet Mohammed” after a teacher at Batley Grammar School allegedly showed students a cartoon of the prophet taken from the French satirical magazine Charlie Hebdo on Monday.

That is not right. We shouldn’t have teachers, members of the staff of schools feeling intimidated. … The reports that a teacher may even be in hiding is very disturbing. That is not the road we want to go down in this country.

The minister said there was an “appropriate balance” to be struck and that teachers must be able to teach in an “uninhibited” but “respectful way”. Jenrick urged the protesters not to continue pressurising the school in question.

Despite a written apology having been issued by the headteacher earlier in the week, an angry crowd began gathering at around 7.30am on Thursday, with reports of parents and pupils chanting, “Allahu akbar” (God is great), before police were called to disperse them.

The demonstrators demanded the resignation of the teacher at the centre of the allegations. Later on Thursday, the headmaster confirmed they had been suspended pending an enquiry.

Footage of the protest drew a fierce reaction from Britons on social media, with many pointing out that blasphemy is not a crime in the UK and accusing the school of waving the “white flag” of surrender by suspending the teacher. Others insinuated that any offended parent should find a different school for their children if they were not in favour of its teaching methods.