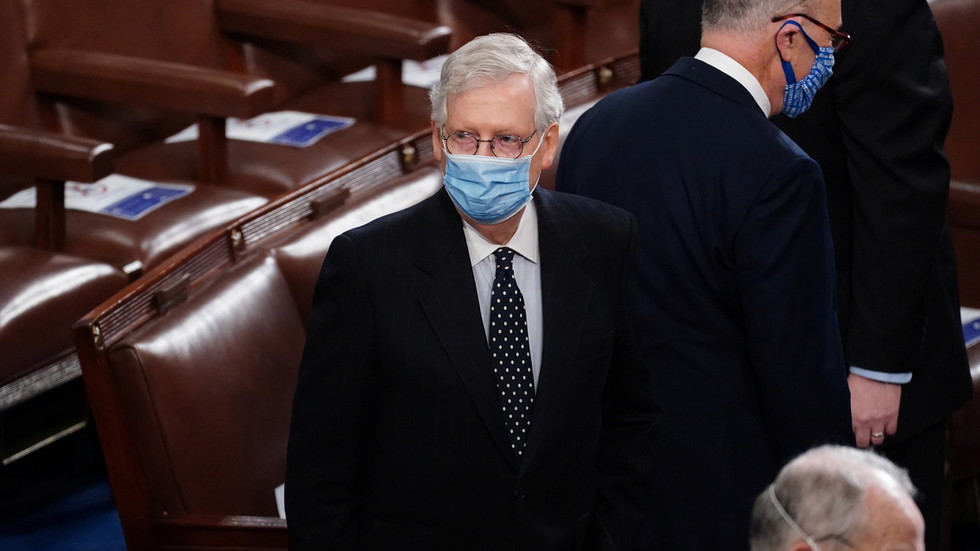 Sen. Mitch McConnell (R-Kentucky) surprised many when he warned against efforts to overturn the Electoral College results in Joe Biden’s favor, saying there is not enough evidence behind Donald Trump’s voter fraud allegations.

“If this election were overturned by mere allegations from the losing side our democracy would enter a death spiral. We’d never see the whole nation accept the election again,” McConnell said on Wednesday on the Senate floor as Congress began their process for certifying the Electoral College votes.

Not long after, Trump supporters breached the Capitol building, prompting evacuations and panic. Images showed what appeared to be an armed stand-off between protesters and police at the door of the House of Representatives chamber. Video later emerged of a woman being shot elsewhere inside the building.

In his comments before the chaos, McConnell added it would be “unfair and wrong to disenfranchise American voters and overrule the courts and states on this extraordinarily thin basis.”

McConnell said he supported Trump pursuing legal avenues in the wake of his loss to Biden, but “over and over the courts rejected these claims including all-star judges whom the president himself has nominated.”

Trump’s allegations of fraud, he continued, do not equate to be massive enough to tip the scales of the election.

“The Constitution gives us here in Congress a limited role. We can’t simply declare ourselves a national board of election on steroids,” he said.

MCCONNELL: "The voters, the court, and the states have all spoken. If we overrule them, it would damage our republic forever."

"If this election were overturned by mere allegations from the losing side, our democracy would enter a death spiral." pic.twitter.com/DGodfXbRyU

McConnell breaking with Trump and other Republicans who have supported voter fraud allegations surprised many on social media, especially liberal pundits who are typically highly critical of the Senate majority leader.

Mitch McConnell making a compelling case against Trump is not something I had on my Trumplandia bingo card https://t.co/2GDOd1T8ct

It took Mitch McConnell four long years, the loss of the White House for his party, and the loss of his title as Senate Majority Leader before he finally spoke out against Donald Trump’s corrupt abuse of power.

Congratulations to Mitch McConnell for condemning the destruction of democracy he dedicated his life contributing to.

More conservative users called the senator out for his sudden turn on the president.

Mitch McConnell oozes dishonesty. That is all.

Thousands had gathered in Washington, DC for the ‘Save America’ rally where President Donald Trump himself spoke, saying he will “never concede” the election to Biden and once again called on Vice President Mike Pence, who presides over the certification, to overrule the “fraudulent” Electoral College votes.

In a statement released Wednesday, Pence said after a study of the Constitution, he does not believe he has the authority to choose which electoral votes get counted and which do not, though he said he shares concern about “the integrity of this election.”