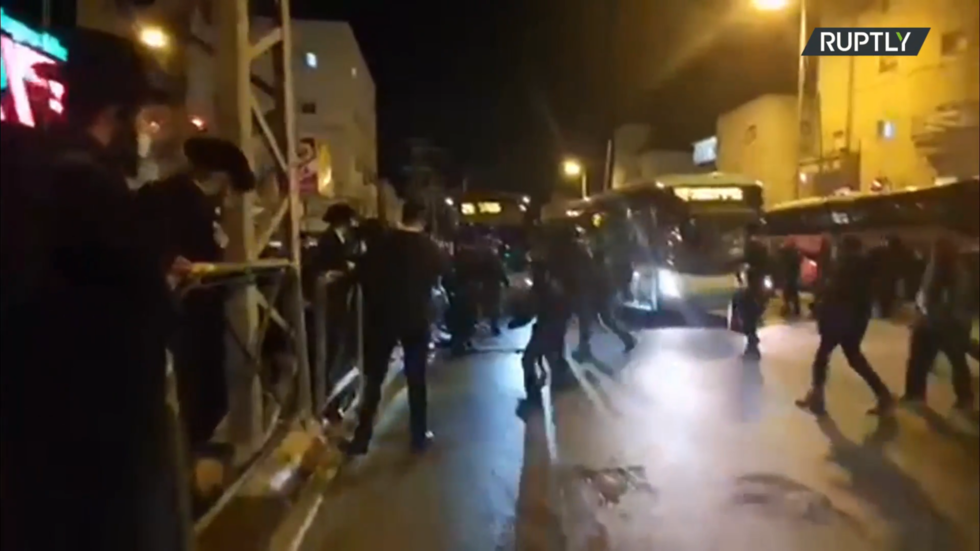 Rioters threw rocks, blocked roads and scuffled with police in an ultra-Orthodox neighborhood in Jerusalem, as anger over Israel’s Covid-19 measures continues to spill into the streets.

Protesters in Mea Shearim, Jerusalem hurled rocks at moving vehicles and created street barricades using garbage dumpsters during Tuesday’s unrest, according to local media. Police are said to have deployed a water cannon to disperse the crowd, and made several arrests.

Footage from RT’s video agency Ruptly shows several fires burning in the streets as demonstrators skirmish with police. Cops in riot gear are seen dragging away several protesters who were blocking the road.

Similar unrest was reported elsewhere in Israel. In Beit Shemesh, a city outside of Jerusalem, hundreds of protesters threw rocks and eggs at police, resulting in three arrests.

In Modi’in Illit, an Israeli settlement in the West Bank, ultra-Orthodox Jews tried to block police vehicles, resulting in confrontations with law enforcement personnel at the scene.

The protests come just days after Orthodox believers in Mea Shearim clashed with police after the community opened its yeshiva religious schools in violation of nationwide lockdown measures.

Israel is currently under its third nationwide lockdown. The restrictions are set to expire on Sunday, but the government has yet to announce a plan to gradually lift them. Health officials have warned that easing measures may be a slow process due to new variants of the virus spreading widely throughout Israel.

Israel’s Orthodox community has been actively resisting the country’s Covid-19 restrictions for months. Their protests against the measures, which have placed limitations on travel and shuttered schools and ‘non-essential’ businesses, have become a regular occurrence.

With Big Tech notoriously male-dominated have these Russian women cracked the algorithm of success in Silcon Valley?