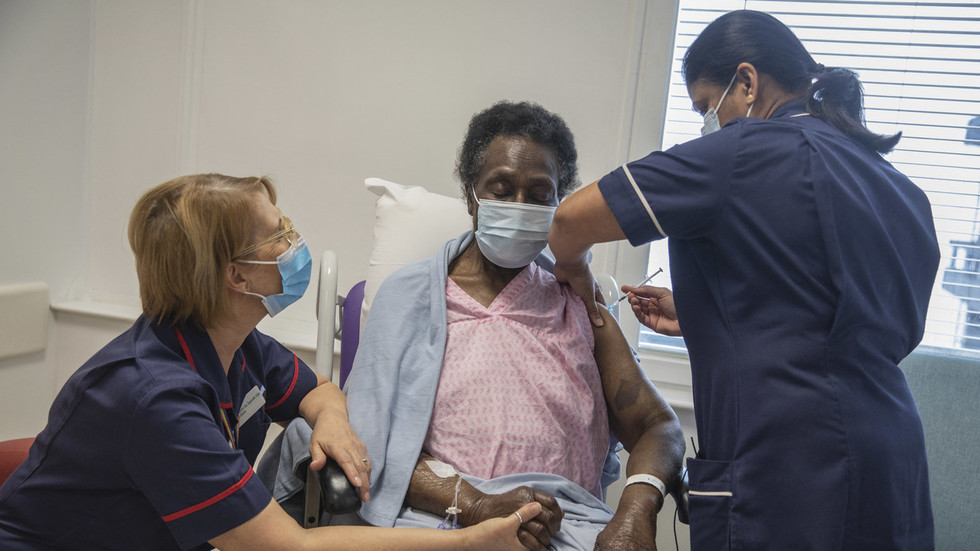 Nearly 19 out of 20 people across England and Wales now think positively of Covid vaccines, the Office for National Statistics (ONS) said on Monday. However, young people in general and black adults are most hesitant to get one.

In its latest lifestyle survey, the ONS found that reluctance to receive a Covid-19 vaccine is highest among black people aged over 40, with 44 percent saying they would hesitate to get the jab.

The figures also show that 17 percent of all survey respondents aged between 16 and 29 would also be hesitant to roll up their sleeves. Young women (19 percent) are more reluctant than young men (15 percent) to do so.

The UK plans to offer at least one dose of its three approved vaccines to everyone over the age of 18 by July. Nearly 23 million have so far received at least one Covid jab.

The top three reasons given for hesitancy were ‘side effects’ cited by 44 percent, ‘long term effects on health’ by 43 percent, and ‘how well the vaccine works’ by 40 percent of those who are reluctant to get it.

“Over the past three months, we’ve seen people become increasingly positive about the Covid-19 vaccines, with over nine in 10 adults saying they would have it if offered, or having already had it,” ONS statistician Tim Vizard said, adding it’s younger people and black adults who are most likely to be hesitant.

The survey found that parents living with a young child were twice as likely (16 percent) as other adults to be hesitant towards receiving the Covid jab. Higher rates of hesitancy were reported in more deprived areas and among lower earners.

Of those expressing negative sentiment towards the inoculations, one in 10 were women who said they were pregnant – or trying to become pregnant – and expressed concern at how the vaccine might affect their babies.

Writing music down like Mozart did is ‘white hegemony’, proposed reform of Oxford’s curriculum reportedly claims

Fewer than 1 in 5 Britons with coronavirus symptoms gets tested and only 2 in 5 isolates, study finds