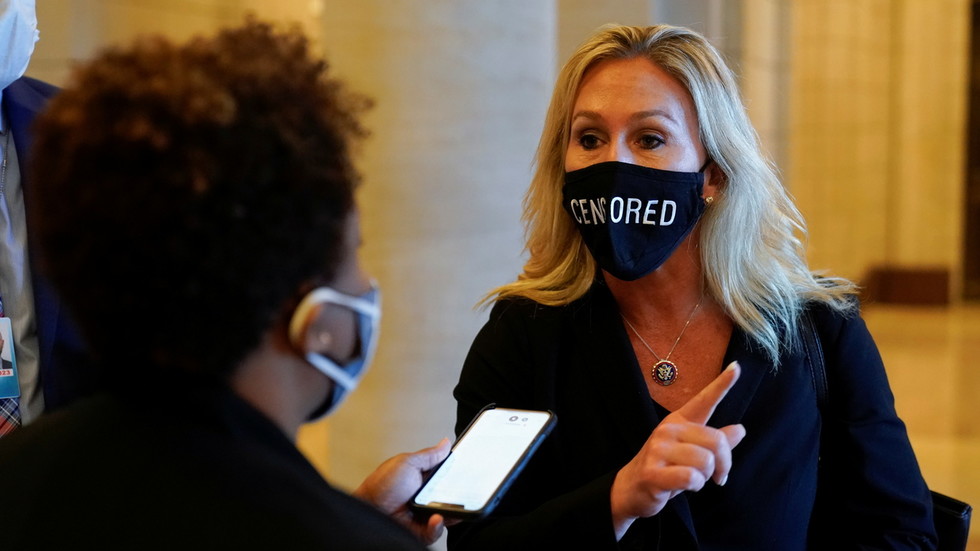 Democratic Rep. Cori Bush said she was forced to move her office for her own safety after Georgia Republican Marjorie Taylor Greene allegedly “berated” her on Capitol Hill, a charge the GOP upstart has emphatically denied.

Bush (Missouri) said in a Friday Twitter post that Taylor Greene and her staff “berated” her “in a hallway” in the Capitol earlier this month, adding “I’m moving my office away from hers for my team’s safety.”

A maskless Marjorie Taylor Greene & her staff berated me in a hallway. She targeted me & others on social media.

I'm moving my office away from hers for my team's safety.

I've called for the expulsion of members who incited the insurrection from Day 1. Bring H.Res 25 to a vote.

Taylor Greene soon shot back, insisting to her followers that “Bush is lying to you” and that the Democrat instead approached her first, sharing a video she recorded at the time of the exchange. “Maybe Rep. Bush didn’t realize I was live on video, but I have the receipts,” she said.

Rep. @CoriBush is the leader of the St. Louis Black Lives Matter terrorist mob who trespassed into a gated neighborhood to threaten the lives of the McCloskey’s.

She is lying to you. She berated me.

Maybe Rep. Bush didn’t realize I was live on video, but I have the receipts. https://t.co/CJjnI3ZTjC pic.twitter.com/ZMLGOGjxKw

The clip begins with Taylor Greene speaking into her phone about the January 6 riot on Capitol Hill, apparently addressing a livestream, before voices are heard shouting in the background, calling on Taylor Greene to “put on a mask.” The Republican, who had her face covering pulled down around her chin, complied, but responded saying “don’t yell at people” and “stop being a hypocrite.”

About an hour after she was accused of lying, Bush took to Twitter with a lengthier statement, this time acknowledging that Taylor Greene had, in fact, “responded” to her calls to fix her mask. She nonetheless continued to claim she was “berated” by a “loud and unmasked” Taylor Greene, also stating the GOP rep had “lashed out” at her on Twitter and made her a “target” online.

On Jan. 13 — after members tested positive for COVID-19 after being locked down with her on Jan. 6 — Marjorie Taylor Greene came up from behind me, loud and unmasked. I called out to her to put hers on.

Her staff yelled at me, “Stop inciting violence with Black Lives Matter.” pic.twitter.com/GtN5AmGrkO

Bush has repeatedly accused Taylor Greene and other Republicans of inciting the Capitol riot earlier this month, which saw a crowd of supporters of former president Donald Trump force entry into the building. She has introduced a resolution calling on the House Ethics Committee to probe whether any lawmakers “violated their oath of office” in contesting the victory of Joe Biden, suggesting any who did should be removed from Congress. She reiterated that demand on Friday, implying Taylor Greene deserves “expulsion” from the House.

Elected to Congress in November after her Democratic challenger dropped from the race, Taylor Greene has quickly made a name for herself among party backers and critics alike. While she rode into office with support from then-president Trump, her detractors have been quick to blast her for previous comments endorsing the QAnon conspiracy movement, as well as her vocal skepticism in Biden’s election win. As one of her first major acts in the House, Taylor Greene introduced an article of impeachment against the new president some 24 hours into his term, alleging he is “unfit” to serve, a long-shot effort that nonetheless shot her name into the headlines.

US First Lady To Help Reunite Migrant Kids With Parents