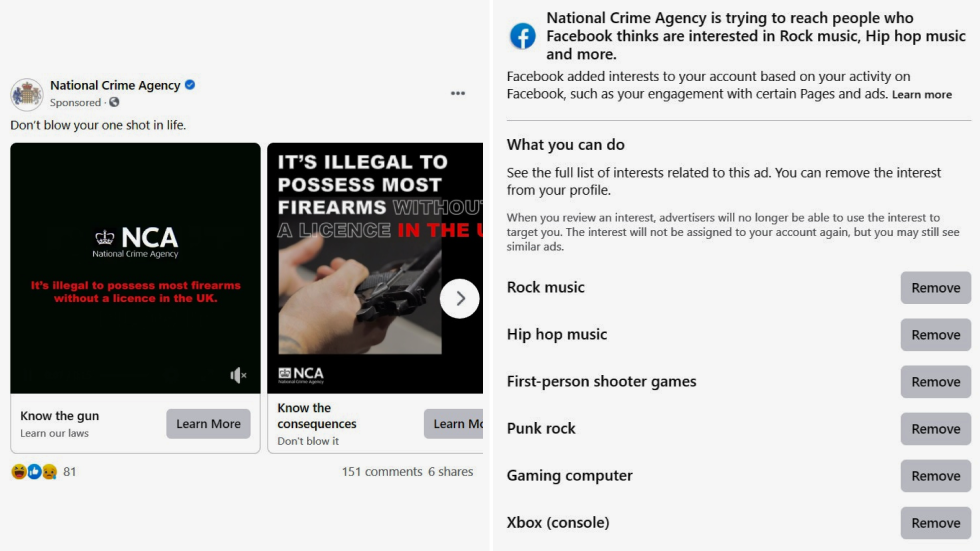 The UK’s National Crime Agency was accused of profiling, after it targeted Facebook adverts warning about the possession of illegal guns to users interested in hip-hop music and video games.

In a social-media advertising campaign this month, the National Crime Agency warned Facebook users that it’s “illegal to possess most firearms without a license in the UK.”

“Don’t blow your one shot in life,” the ad declared.

The National Crime Agency came under scrutiny, however, after users discovered the ad was targeting young people between the ages of 18 and 25 who were interested in hip-hop music, Xbox, and first-person shooter games.

“Targeted at 18-25s with rock music, hip-hop and Call of Duty [interests]? Looks like profiling to me,” commented one user who noticed the advert’s specific targeting, while another quipped, “Welcome to the watch list, boys.”

“Why the hell am I getting adverts for this? Me and my little brother talk about Call of Duty a lit[tle] but that’s really sus,” questioned yet another targeted user.

Other Facebook ‘interests’ the National Crime Agency used to target the advert included rock and punk rock, and gaming computers. Facebook automatically attaches its users to such ‘interests’ based on their activity on the social network.

Facebook previously experienced a backlash for allowing advertisers to target ethnic groups based on “multicultural affinity.” The feature was famously used to show different trailers for the 2015 NWA biopic ‘Straight Outta Compton’ to different races, but was also reportedly used by companies to exclude housing adverts from certain populations.

The social network has since stopped advertisers from directly targeting those with “African American affinity” or “Hispanic affinity,” but it still possible to do so indirectly by focusing on other ‘interests’.

Covid: Oxford-AstraZeneca vaccine to be tested on children

Myanmar coup: What will the military do now?