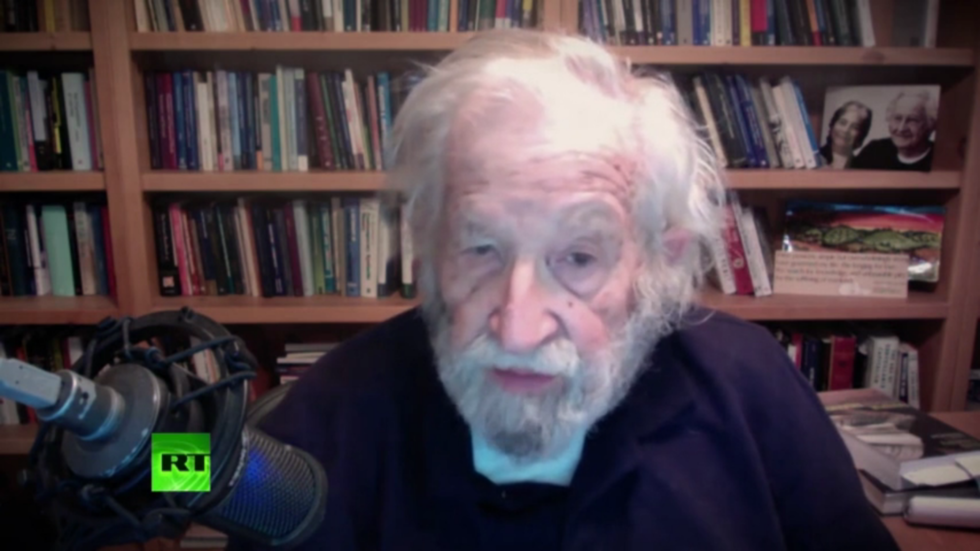 Just like many Trump supporters, US liberal intellectuals exist in a fantasy world in which a leading purveyor of “international terrorism” – the US government – is perceived as a fundamentally benign force, Noam Chomsky told RT.

“Just as you can’t get the Republican mobs to admit that the election was lost, you can’t get liberal American intellectuals to recognize that the United States is a leading terrorist state,” Chomsky told RT’s Chris Hedges.

The facts are that for almost the entirety of its history as a sovereign state, the US has waged a war of aggression against somebody, Chomsky said. The so-called ‘War on Terror’, which Ronald Reagan made the focus of his foreign policy, was Washington dealing with “resistance to US terrorism in Central America and also in South Africa.”

Nelson Mandela was considered terrorist by the US until 2008, long after the apartheid regime was dismantled. The US clandestine war on Nicaragua was ruled by the International Court of Justice a breach of international law.

“What the Reagan administration was doing was the peak of terrorism by our own definitions,” Chomsky said. “But the New York Times ran an editorial saying we can dismiss the judgement of the court because it’s a hostile forum. Why is it a hostile forum? Because it condemned the US.”

Another victim of the US is Cuba, which endured a decades-long blockade and a sustained US campaign to undermine its government and cause an uprising. In the US, those actions are perceived as the CIA hatching silly plots to take away Fidel Castro’s beard. “It was not that, it was a serious terrorist war that almost led to the destruction of the world” with the Cuban missile crisis, Chomsky pointed out.

The failure of liberal intellectuals to see US policies for what they are is not something buried in the history books or limited to what is happening in foreign lands. The January 6 riot at the Capitol, for example, was not some “crazed mob” of Trump supporters coming “out of nowhere” and being defeated to prove the glory of American democracy.

“There are really serious ills – bipartisan, incidentally, although the Republicans have gone off the spectrum – but those are not being discussed,” he said.

And this failure is doing real harm to millions of Americans. The ideas of Bernie Sanders, a politician who would easily be considered right-center in a country like Germany, were painted as too radical for the US during the presidential campaign.

“What he is calling for – universal healthcare, free higher education – is just taken for granted by conservative parties in Europe,” Chomsky said. “This is such an insult against the American people to say, you are so backward and reactionary that you can’t have what Mexico has, what France has, what Brazil has.”

Pope to be vaccinated against Covid next week, labels opposition to jabs ‘suicidal denial’

Moderna vaccine gets FDA emergency approval, becoming second jab in US to get green light