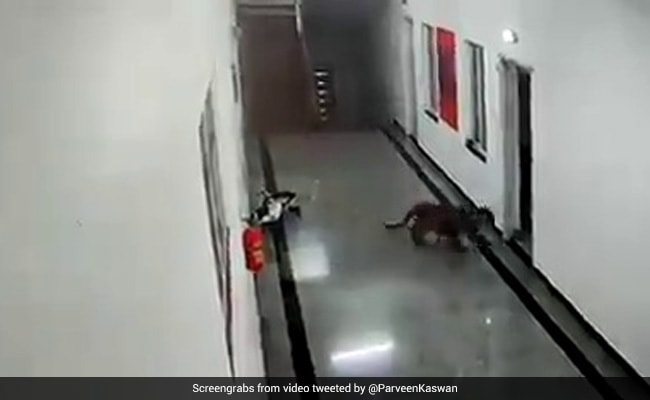 A leopard was filmed walking into a medical college in Karnataka.

Surveillance camera footage that shows the leopard running into the hostel building was shared on Twitter by Indian Forest Service officer Parveen Kaswan. He initially identified the big cat as a black panther – the common name given to melanistic big cats – before adding that the leopard filmed here could have been non-melanistic too.

“A common leopard. With little dark complexion it seems,” he wrote. “Black panthers are also normal leopard only. Though melanistic. This could be non-melanistic also. In night.”

The footage shows the leopard running the length of a corridor and inspecting a door before going out the same way it had come in.

When a black panther comes for college inspection. Karnataka. @anil_lullapic.twitter.com/754rGgRBx4

The video has been viewed nearly 8,000 times on the microblogging platform.

“Bagheera has come for admission,” quipped one person in the comments section.

Speaking to Udayavani, Dr Sanjeev, Dean of Chamarajanagar Medical College, confirmed the leopard sighting. As the Government Medical College is attached to a tiger reserve, leopards are often spotted on campus, the dean said.

College staff were witness to this particular leopard incursion on January 2.

This is not the first time that a leopard has strayed into a college. In 2019, a leopard entered the Srinagar Government Medical College in Uttarakhand.

Rahul Gandhi Only Leader Who Can Take On Mantle Of Congress Presidentship, Says Bhupesh Baghel