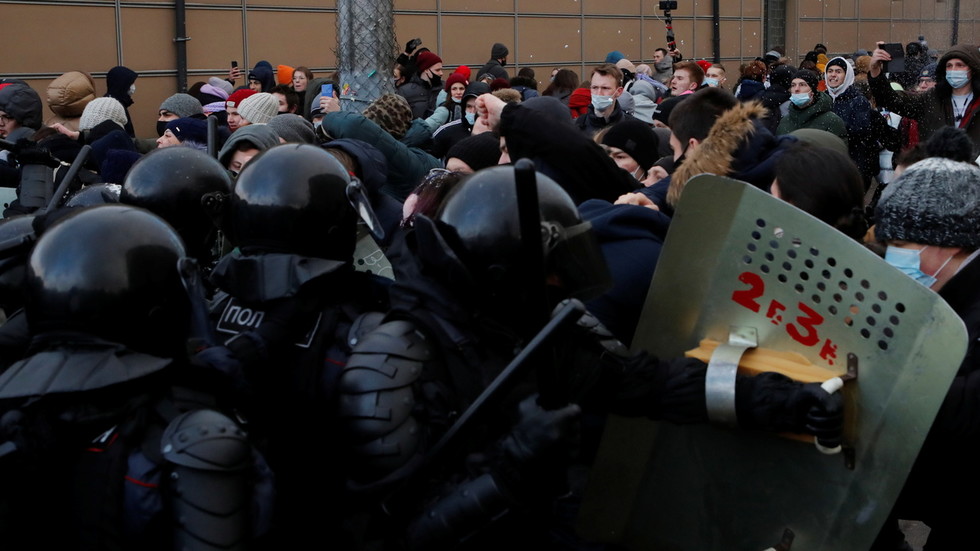 Russian President Vladimir Putin’s spokesman has defended the police’s decision to take tough measures to detain and disperse supporters of jailed opposition figure Alexey Navalny at rallies across the country over the weekend.

Speaking to journalists on Monday, Dmitry Peskov said that the demonstrations attracted “quite a large number of hooligans and provocateurs,” which, he argued, explained the violent clashes with authorities. However, he added, the use of force had to be carefully monitored, even if it was necessary in the face of “illegal actions.”

The Kremlin press secretary added that there was no prospect of dialogue with those causing unrest in the streets and that the minority responsible for violence should be dealt with “in full strictness of the law.” “As for other people,” he added, “there are all the tools for expressing your point of view within the law at your disposal.”

During the briefing with reporters, Peskov also slammed the Anti-Corruption Foundation (FBK), set up by Navalny in 2011, which this week wrote to new US President Joe Biden requesting the White House sanction Russia over Navalny’s arrest. “Let’s just say the Fund has demonstrated, technically and in general, that it deserves the status of a foreign agent,” he said. The FBK was previously handed the status by the Ministry of Justice as a consequence of receiving funding from overseas.

The group attached a list of “corrupt Russian allies of President Putin,” including billionaire Roman Abramovich, the country’s Minister for Health Mikhail Murashko, and 33 other prominent figures. “We would be grateful if the US would take concrete policy and sanctions actions to limit corruption and abuse of human rights,” it said.

First Deputy Chairman of the Russian Federation Council Committee on Foreign Affairs Vladimir Dzhabarov lashed out at the organization in comments made to RIA Novosti on Sunday. “It smacks of treason,” he said. “Can you imagine an American organization appealing to Vladimir Putin with a request to impose sanctions on the US president?”

Thousands of people took to the streets of cities across Russia on Sunday for a second consecutive week of protests. While most were peaceful, some fought with officers and a police van was allegedly torched in Moscow. In St. Petersburg, which has seen some of the most pronounced violence over the past fortnight, a video emerged of a tense standoff between officers and protesters. After a small group of police were chased down a street off the city’s Sennaya Square, one officer, who had stumbled after being kicked by a pro-Navalny marcher, drew his service pistol.

The unrest follows the arrest of the anti-corruption activist after landing at Moscow’s Sheremetyevo Airport earlier in January. He had flown home from Berlin, where he had been transferred in a comatose state after what his supporters, and some international observers, allege was a state-sponsored poisoning with the nerve agent Novichok.

The opposition figure is accused of violating the terms of a three-and-a-half-year suspended sentence for fraud. He is due to stand trial over the charges in early February.

120 Arrested Over Tractor Rally Violence, Including A Punjab Farmer, 80