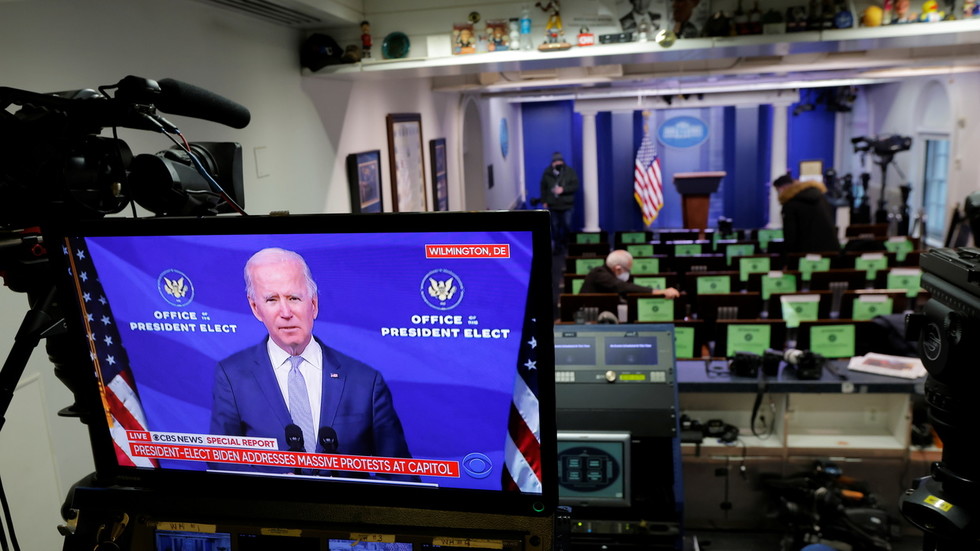 US President-elect Joe Biden called on President Donald Trump to go on air to denounce the storming of the Capitol by crowds of his supporters, insisting the chaotic demonstration was not a “protest” but an “insurrection.”

Saying the scenes at the Capitol on Wednesday bordered on “sedition,” Biden urged the president to “go on national television now, to fulfill his oath and defend the Constitution, and demand an end to this siege” in an address shortly before Trump took to Twitter with a video of his own.

I call on President Trump to go on national television now to fulfill his oath and defend the Constitution by demanding an end to this siege.

Heated protests erupted in Washington, DC earlier on Wednesday as Congress convened to certify the presidential election for Biden, but the ‘Save America’ rally escalated into an outright breach of the Capitol building as a swarm of Trump’s backers pushed through security barriers and forced their way in, prompting an evacuation of officials and staff.

The president-elect blasted the display as an “unprecedented assault” on democracy and the rule of law “unlike anything we’ve seen in modern times,” saying it verged on “sedition.”

The scenes at the Capitol do not reflect a true America, do not represent who we are. What we’re seeing are a small number of extremists dedicated to lawlessness…. I call on this mob to pull back and allow the work of democracy to go forward.

In his own video, posted to Twitter, President Trump also urged his supporters to “go home in peace,” calling for an end to the violent demonstration, which saw one woman shot as a group of protesters attempted to enter the Senate chamber.

She was taken out of the building on a stretcher and is reportedly in critical condition.

A 6pm curfew has been called across the nation’s capital, where 340 National Guard troops were earlier deployed in anticipation of unrest at a planned Trump rally. Virginia’s Democratic Governor Ralph Northam has also sent a Guard unit and some 200 state troopers to DC to assist local authorities.

Trump and his backers insist the 2020 presidential race was marred by widespread voter fraud, and have called on Republican lawmakers, as well as Vice President Mike Pence, to challenge the certification of Electoral College votes in a last-ditch effort to flip the election. Pence, however, released a statement on Wednesday saying he does not have the legal authority to toss out votes.

The breach at the Capitol sent the building into lockdown and saw Congress thrown into recess, interrupting the vote count, which had only certified two states, Alabama and Alaska. It is unclear when the process will resume.

Villarejo: The rise and fall of the Spanish state's secret fixer

Biden approves US airstrike on Iran-backed militias in Syria