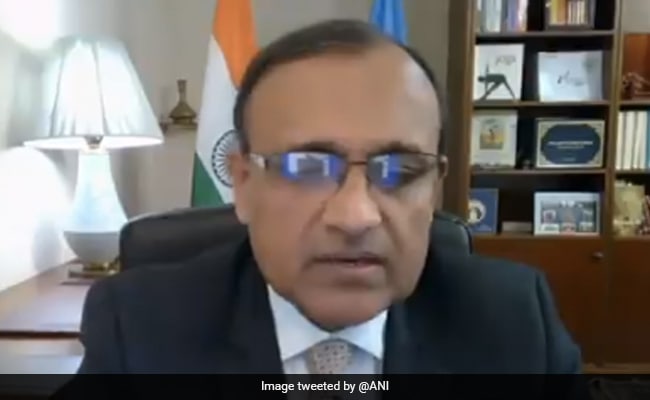 The increasing tendency to politicise humanitarian situations is unfortunate, India has said at the UN, stressing that nations must resist linking developmental aid with progress in the political process as this will only enhance food insecurity in conflict situations.

Speaking at the UNSC open debate on ‘Conflict and Food Security’ on Thursday, India’s Permanent Representative to the United Nations Ambassador TS Tirumurti said there was an urgent need for the donor community to scale up assistance to conflict-affected countries, and to ensure that humanitarian agencies receive the necessary funding to fully execute their plans without politicisation of basic needs of the people.

“While all humanitarian action must be primarily guided by the principles of humanity, neutrality, impartiality and independence, we are unfortunately witnessing an increasing tendency to politicise humanitarian situations,” he said.

“Such a position by donors will only enhance food insecurity in conflict situations,” he added.

“If you don’t feed people, you feed conflict,” the UN chief said.

“When a country or region is gripped by conflict and hunger, they become mutually reinforcing. They cannot be resolved separately. Hunger and poverty combine with inequality, climate shocks, sectarian and ethnic tensions, and grievances over land and resources, to spark and drive conflict,” he said.

Citing estimates from the World Food Programme (WFP), Mr Tirumurti said the number of people suffering from food insecurity is projected to more than double by the end of 2020 to 270 million people, with the COVID-19 pandemic making it worse.

The “Global Report on Food Crises 2020” by WFP and 15 other humanitarian and development agencies notes that more than 77 million people are suffering from acute food insecurity in conflict-affected countries.

He said the pandemic has only served to make food insecurity more complex by forcing countries to impose restrictions on the movement of people, thereby depriving farms of hands to reap the harvest, resulting in loss of farm-based employment, limiting access to food in the rural areas and eroding the ability of the State to cope with the socio-economic pressure of the pandemic.

Mr Tirumurti also pointed out that fragile States generally have weak capacities to design, implement and monitor policies and programmes related to food, thereby increasing their vulnerability while facing a conflict situation.

“The solution for lack of food security in conflict-affected States is, therefore, elsewhere. As such conflict-induced food-security issues should be taken up by Council only in the context of specific countries where it may pose a threat to international peace and security,” he said.

India is of the view that armed conflict and terrorism combined with extreme weather, crop pests, food price volatility, exclusion, and economic shocks can devastate any fragile state leading to food insecurity and increase the threat of famine, he said.

“Armed groups have time and again resorted to scorched-earth tactics and deliberately targeted civilian infrastructures such as land, farm animals, and water wells which erode economic growth and development. Inability to fight locusts, for example, can affect an entire region and even further, and directly affect food security,” he said. Mr Tirumurti stressed that inclusive food systems that empower marginalised people by giving them a voice in local food policies will usher in a food secured future.

“This would enable young people and women to find remunerative jobs, small farm holders to have access to agricultural markets, and adoption of climate-smart policies that promote seed diversity, innovation, and the spirit of self-reliance,” he said.

He cited the example of Northeast Nigeria, where thousands of people are trapped without life-saving humanitarian assistance and of Yemen, where restrictions on land, sea, and air trade routes have led to severe cuts of vital supplies of commodities such as food, fuel, and medicines.

Emphasising that food security is the basic minimum required particularly as the world deals with the devastating COVID19 crisis, Mr Tirumurti quoted Mahatma Gandhi who has said: “There are people in the world so hungry, that God cannot appear to them except in the form of bread”.

In the midst of the COVID-19 pandemic, India has provided food aid in the form of thousands of metric tonnes (MT) of wheat, rice, pulses and lentils to several countries across the world, including Myanmar, The Maldives, Afghanistan, Djibouti, Eritrea, Lebanon, Malawi, Sierra Leone, Sudan, South Sudan, Zambia, Zimbabwe and others, to strengthen their food security during the challenging times, he said.

Last month, India gifted 2000 MT of rice to strengthen food security in Syria and a ship is currently enroute from India to deliver 1000 MT of food aid each to Madagascar and Comoros.

“We remain committed to providing assistance to all vulnerable countries to support them in their quest for food security,” Mr Tirumurti said.

Snake With Smiley Face Emojis On Its Back Sells For $6,000

Police Barricades Knocked Down Near Delhi As Farmers Begin March