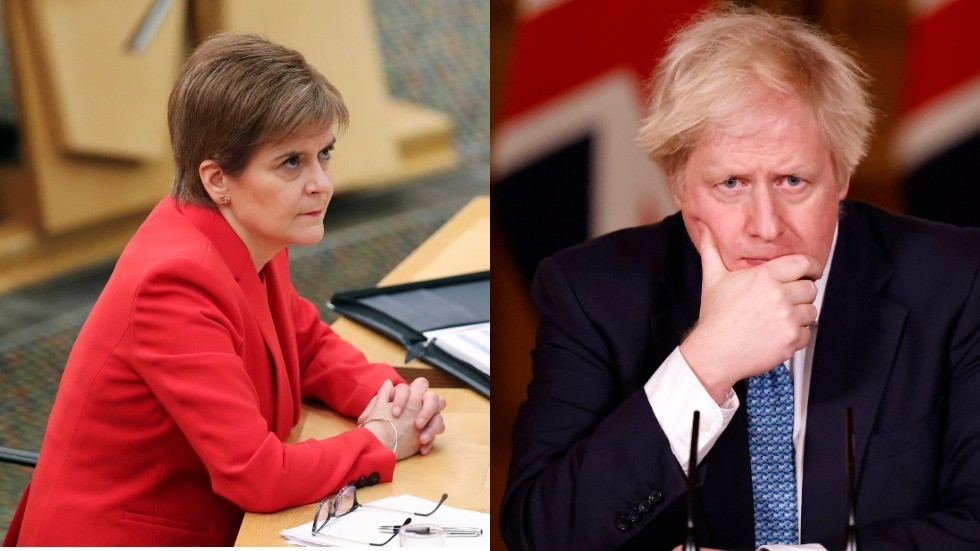 Scottish First Minister Nicola Sturgeon is standing by her threat to hold a fresh referendum on independence if her party wins the May elections, despite Boris Johnson saying another one should not take place until at least 2055.

Sturgeon likened UK Prime Minister Boris Johnson to a “cowering tim’rous beastie” – a line from the poem ‘To a Mouse’, about a scared mouse, by Scotland’s national poet Robert Burns – during an interview with the BBC on Sunday. The Scottish leader also accused Johnson of being “frightened of democracy” by opposing another Scottish referendum until at least 2055 – just over 40 years after the last referendum in 2014, when a 55 percent majority of Scots voted against independence.

“The polls now show that a majority of people in Scotland want independence,” Sturgeon declared, adding, “If the SNP win the Scottish election in a few months’ time on a proposition of giving people that choice, then what democrat could rightly stand in the way of that?”

She added, “Boris Johnson clearly just fears the verdict and the will of the Scottish people.”

On Saturday, the SNP revealed in its “roadmap to a referendum” that a draft independence referendum bill “would be enacted if an SNP Scottish Government is re-elected with a majority to do so” in the May 2021 elections. The party claimed that such a referendum would be beyond any “legal challenge” from the UK government, though it stressed that any referendum would only be held after the Covid-19 pandemic.

“If the SNP takes office the Scottish Government will again request a Section 30 order from the UK Government believing and publicly contending that in such circumstances there could be no moral or democratic justification for denying that request,” the roadmap declared, warning, “If the UK Government were to adopt such a position its position would be unsustainable both at home and abroad.”

As explained by the UK Parliament website, a Section 30 order from the Scotland Act 1998 can “grant legislative authority to the Scottish Parliament in certain areas,” either temporarily or permanently, independently from the UK government.

Johnson and his government have vocally opposed Sturgeon’s campaign, however, drafting up their own five-point plan to counter support for Scottish independence.

“Referendums in my experience, direct experience, in this country are not particularly jolly events,” said Johnson earlier this month. “They don’t have a notably unifying force in the national mood, they should be only once-in-a-generation.”

Johnson justified the UK’s independence from the European Union by pointing out that the referendum in 2016 was decades after the previous referendum in 1975 – a significantly longer time gap than Scotland’s seven years between 2014 and 2021.

Get Well Boris Johnson Hashtag #GetWellBoris is Trending on Twitter