Home > INDIA > In Dramatic Rescue, Man Pulled Out Of Collapsed Tunnel In Uttarakhand 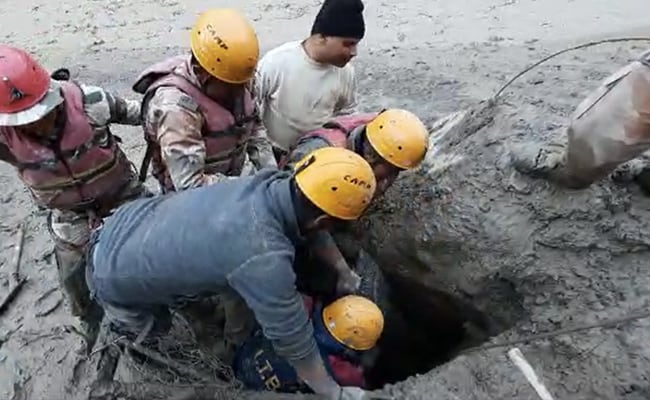 In Dramatic Rescue, Man Pulled Out Of Collapsed Tunnel In Uttarakhand

A worker in Uttarakhand is pulled out of a narrow tunnel by the personnel of the Indo-Tibetan Border Police or ITBP, who have been pressed into the rescue operation after a glacier break and subsequent flash flood in the state’s Chamoli district, a mobile video showed.

The clip shows the ITBP personnel slowly pulling out a man from the tunnel – just a couple of meters wide – using a rope amid chants of “zor laga ke haisha“. As the man emerges from the muddy tunnel, the personnel cheer.

All 16 workers have been rescued from the tunnel, said the local administration.

Over 100 people are missing, and feared dead, after a glacier break at Joshimath in Uttarakhand’s Chamoli district triggered massive flooding of the Alaknanda and Dhauliganga rivers on Sunday. 10 bodies have been recovered so far.

The Army, the National Disaster Response Force (NDRF) and paramilitary personnel are conducting the rescue operation.

“Medical teams have been rushed to the affected site. 30 bed hospital has been kept ready at Joshimath for dealing with this emergency. Hospitals in Srinagar, Rishikesh, Jollygrant and Dehradun are on standby. We are doing our best to deal with this disaster,” Chief Minister Trivendra Singh Rawat tweeted.

600 personnel from @adgpi & @ITBP_official are on standby for dealing with any emerging situation. All the rescue teams are doing their best to save lives of missing workers at NTPC (140 nos) & RishiGanga site (17 nos). My prayers are with every missing worker. #Uttarakhand

The centre has assured help to the state.

“Am constantly monitoring the unfortunate situation in Uttarakhand. India stands with Uttarakhand and the nation prays for everyone’s safety there. Have been continuously speaking to senior authorities and getting updates on NDRF deployment, rescue work and relief operations,” Prime Minister Narendra Modi tweeted.

Goldsmith Shot Dead By Terrorists In Jammu And Kashmir’s Srinagar

Abhishek Banerjee Has Become A Sheikh