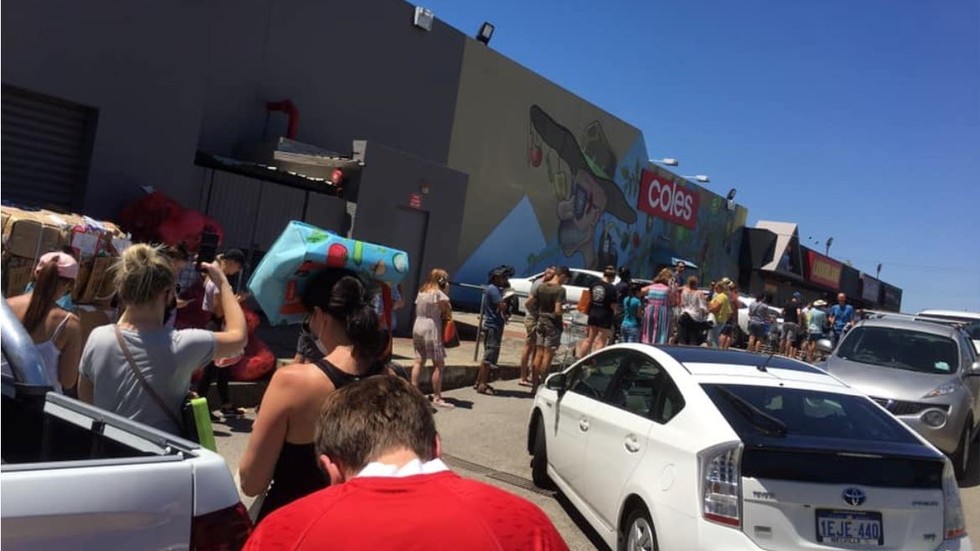 Australians posted photos and videos of long queues and overflowing stores after the city of Perth announced a five-day coronavirus lockdown on Sunday.

Videos showed mega-lines forming outside several Woolworths supermarkets in a final rush to panic buy supplies after a single confirmed case of Covid-19 from a quarantine hotel security guard prompted the city to announce a new lockdown.

Unlike most of the world, Australians have enjoyed a relatively relaxed environment during the Covid-19 pandemic, and Western Australia – where Perth is situated – had previously not recorded even a single case of the virus locally for 10 months.

The lines are inside the shops and outside the shops in #perth.
1 confirmed case.
5 days lock down.
Oh Perth. pic.twitter.com/zVbkF0nzki

Clips showed the majority of shopping trolleys stacked with large packs of toilet paper as the shelves were stripped bare, and huge crowds of mostly maskless Western Australians could be seen congregating in the stores with very little social distancing.

There is literally a cue to get into Woolworths in Aveley. The car park has been closed as Perth residents start panic buying. I arrived here as the McGowan presser started. pic.twitter.com/7TRO0ImoJP

Even items like fresh fruit, milk, and eggs were panic bought off the shelves, despite the fact that supermarkets will remain open.

The lockdown, which was announced by Western Australian Premier Mark McGowan and is in place from Sunday evening until Friday, temporarily forbids restaurants, bars, gyms, schools, and other social venues from opening, limits exercise, allows only essential travel, and enacts mandatory face masks in public.

At a press conference, McGowan said that although “for many Western Australians this is going to come as a shock,” the state “cannot forget how quickly this virus can spread, nor the devastation it can cause” and must “deal with” the threat “very, very quickly and harshly” when it arises.

The majority of Australian Covid-19 cases have been recorded in and around the city of Melbourne and its state of Victoria, which has had over 20,000 confirmed cases since the start of the pandemic. Western Australia, in comparison, has recorded just 903 cases and nine deaths.

Syria attack: At least 28 killed in ambush on bus

‘Sounds like a hit show’: Mediaite sets off wave of confusion and mockery for describing CNN’s Don Lemon as ‘OPENLY BLACK’