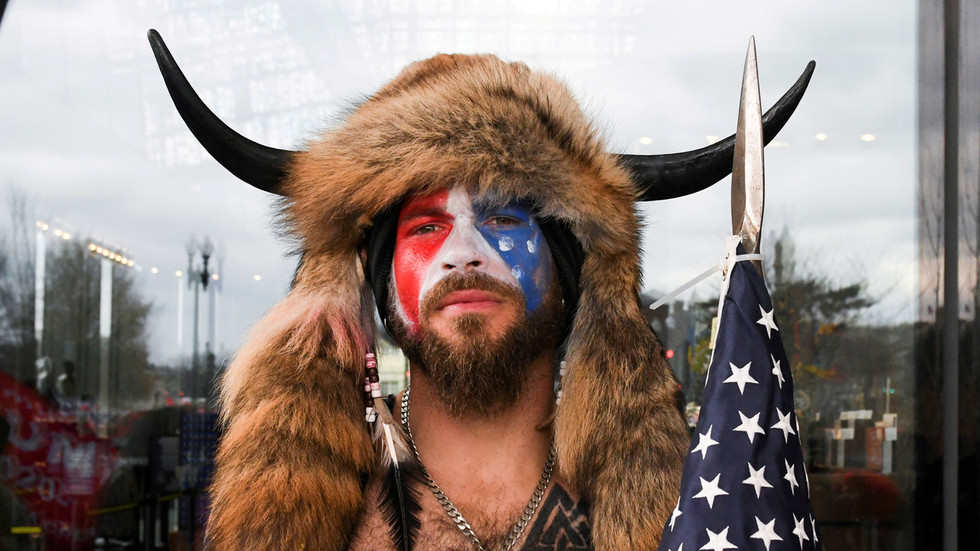 The man who showed up to the Capitol riot sporting fur and a horned headdress – known as the “QAnon Shaman” – is willing to testify at ex-president Donald Trump’s impeachment trial, his lawyer said.

The horned rioter, Jacob Chansley, is prepared to speak out against Trump at his upcoming impeachment hearings, his lawyer Albert Watkins told the Associated Press on Thursday. While the self-proclaimed ‘shaman’ was previously a major supporter of the former POTUS, he now feels “betrayed” after Trump declined to pardon those charged for taking part in the disturbance, the attorney added.

Chansley told law enforcement he attended the rally-turned-riot “at the request of the president,” claiming he had asked that “all patriots come to DC on January 6,” according to court records cited by the AP. He is not the only one to make a similar argument, with at least four other protesters insisting they were merely following Trump’s orders.

Trump, for his part, did encourage his supporters to demonstrate at the Capitol over alleged voter fraud in the 2020 presidential race, though at no point suggested they storm the building, explicitly urging them to protest “peacefully and patriotically.” Nonetheless, his repeated claims of mass election irregularities have fueled charges that his rhetoric “incited” the riot, prompting a Democrat-led impeachment initiative, supported by 10 Republicans.

Watkins said his client has yet to reach out to the Senate to discuss the possibility of testifying at the trial, set to begin early next month, but noted it is important for lawmakers to hear from somebody who was – apparently – driven into a blind frenzy by Trump’s words.

“Let’s roll the tape. Let’s roll the months of lies and misrepresentations and horrific innuendo and hyperbolic speech by our president designed to inflame, enrage, motivate,” Watkins told a Missouri NBC-affiliate last week, adding that his client feels “duped” and regrets taking part in the unrest “very, very much.”

Chansley was a fixture at Arizona Trump rallies for a time, gaining a reputation as the “QAnon Shaman,” a reference to the online conspiracy community which claims, among a wide array of theories, that world governments are ruled by a Satanic pedophile ring. He was arrested on January 9 for his role in the riot, where he garnered immense media attention for his unique, if not highly visible, attire.

Five families, five Christmases: A festive season like no other around Europe

No freebies! Pfizer to charge for ‘extra’ Covid-19 vaccine doses as doctors squeeze vials of every drop to inoculate more people

UPPRPB To Fill 9534 SI Posts In UP Police