Home > WORLD > ‘He went crazy’: Russian team disqualified after skier clashes with Finnish rival before PLOWING INTO him at finish line (VIDEO) 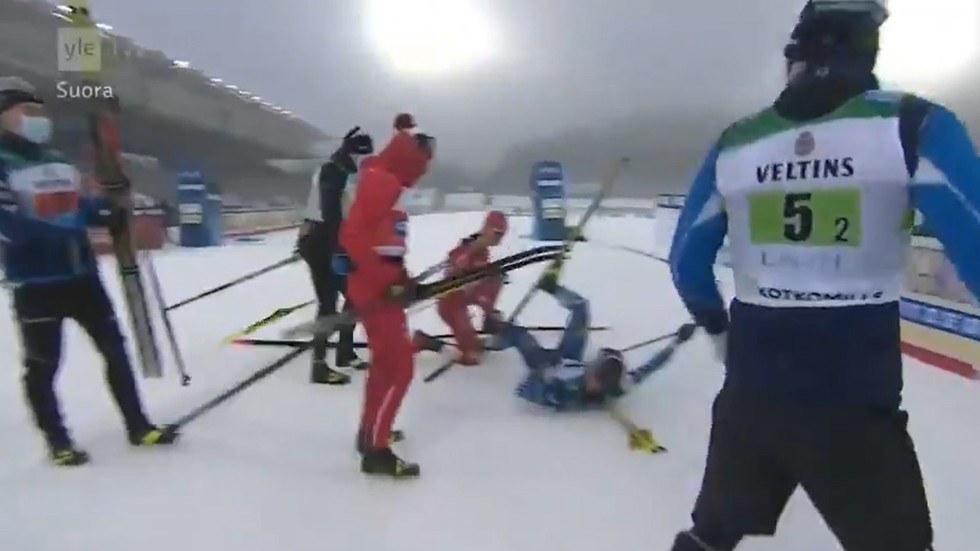 ‘He went crazy’: Russian team disqualified after skier clashes with Finnish rival before PLOWING INTO him at finish line (VIDEO)

The Russian men’s first team were stripped of their bronze medal in the 4 x 7.5 km relay at the Cross-country World Cup stage in Finland after skier Alexander Bolshunov clashed with a rival.

Racing for the finish line in a battle for second spot with Finland’s Joni Maki, Bolshunov found his route blocked off.

Unable to pass, the Russian lashed out with his stick before giving up the chase – but worse was to follow when Bolshunov plowed into his Finnish rival after crossing the line.

One fan joked that Bolshunov’s antics were more akin to MMA than cross-country skiing, while Russian media outlets described the 24-year-old star – who is a multiple champion in the prestigious Tour de Ski event – as “going crazy” with his actions at the finish line.

Commenting on the disqualification, a report on the FIS website said: “Due to a tight situation in choosing the lines towards the finish, which triggered an unsportsmanlike behavior of Bolshunov against Maki, Bolshunov [was] disqualified and thus the entire Team Russia 1.”

However, Russia still claimed a medal in Lahti as the nation’s second team was promoted to third, having initially finished behind their countrymen in fourth place.

The Norwegian team claimed victory, while Finland’s podium finish was their first ever in the men’s relay event, thanks to their team of Maki, Perttu Hyvarinen, Ristomatti Hakola and Iivo Niskanen.

Months Before Polls, LDF Says Will Transfer Cases To CBI