Home > WORLD > ‘He tried to hurt him’: Finnish and Russian fans row as skier suffers Instagram venom after dust-up and disqualification (VIDEO) 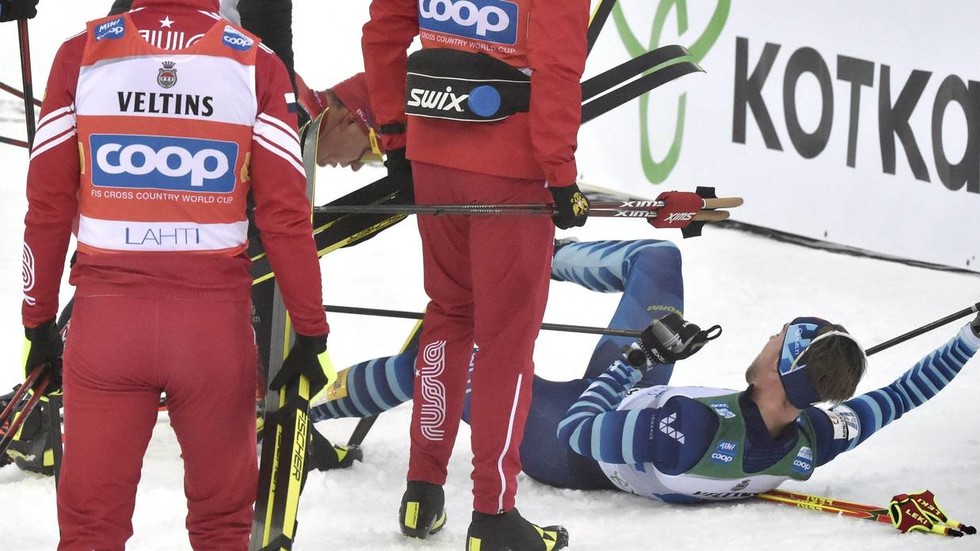 ‘He tried to hurt him’: Finnish and Russian fans row as skier suffers Instagram venom after dust-up and disqualification (VIDEO)

Finnish skier Joni Maki was forced to make his Instagram account private after being bombarded by Russian fans who blamed him for a clash with Olympic medalist and Russian team leader Alexander Bolshunov at the end of a race.

Bolshunov, who was fighting for second place overall against Maki, was visibly infuriated after his way to the finish was blocked by the Finn.

Finding himself unable to pass, the Russian angrily whipped his rival with a ski pole before plowing into him after crossing the finish line.

Bolshunov’s actions resulted in the disqualification of the Russian team, with fans insisting Maki should also have been penalized on account of his “provocative” behavior on the ski track.

The Finn’s Instagram account was flooded with furious messages from Bolshunov’s fans, who accused the skier of violating fair-play rules.

Maki said he had felt he had no option but to temporarily make his account private in a bid to halt direct messages and comments from unwelcome critics.

“It was enormously difficult to focus on important things this week,” he said. “I have received many messages from Russia and was forced to restrict access to my Instagram account.”

Bolshunov and the president of the Russian Ski Association, Elena Vyalbe, issued an apology for the incident that the Finnish side has accepted.

Tensions have continued to blaze between fans, though, with the argument even extending to accusations that poor conduct is a trait of Russian teams in sport.

To be clear to any kids and coaches watching: This tackle by Bolshunov is not okay. If a U.S. athlete did this, they’d be sent home and removed from the team. A disqualification would just be the beginning of their problems. @FISCrossCountrypic.twitter.com/3FgfqqB5yC

Let me be clear. Bolshunov tried to hurt him, that is violence not sport. What if the guy he tackled had been injured? He should be banned. But unfortunately I believe the FIS will give him a break…till he hurts someone so bad the cannot ski further.

Well Matt, it’s all about the culture. I mean russian culture, not just sport culture.

“To be clear to any kids and coaches watching, this tackle by Bolshunov is not OK,” blasted one ski coach.

“If a US athlete did this, they’d be sent home and removed from the team. A disqualification would just be the beginning of their problems.”

Another argued: “Let me be clear: Bolshunov tried to hurt him. That is violence, not sport.

This kind of behavior is totally unacceptable. They were right to go ahead with the ban

Thank you @Matt_Whitcomb for saying what needed to be said. This was like watching Jan. 6th unfold here in the US. Like, really? No one's going to stop this? Are there clear FIS rules for what happens after the finish line or have they never been necessary until now?

“What if the guy he tackled had been injured? He should be banned. But unfortunately, I believe the [governing body] FIS will give him a break until he hurts someone so bad they cannot ski further.”

The Russian Ski Federation issued a statement of apology on behalf of Bolshunov and coach Gelina Valbe.

“The hostility is not in the spirit of [us] and we greatly appreciate the spirit of fair play in everything,” they said, adding the Bolshunov had personally said sorry to his rival.

“An official letter has also been sent to the Finnish Ski Association. We sincerely hope that all of our athletes’ determination, hard work, performance and beauty of cross-country skiing will return to a theme that will delight fans around the world.”

On Friday, Bolshunov won the men’s 15km race, adding that it was the best response to those criticizing him for the conflict with Maki.

“Criticism only makes us stronger,” he said after the race. “Please criticize us more often and we will become stronger, showing better results on the track.”

‘If you compare risks, you’ll take a vaccine’: Renowned US physician says Covid-19 jabs are ‘quite safe’