Home > WORLD > ‘He loves me too much’: Pogba says Zlatan isn’t racist after storm over ‘voodoo’ jibe to Lukaku 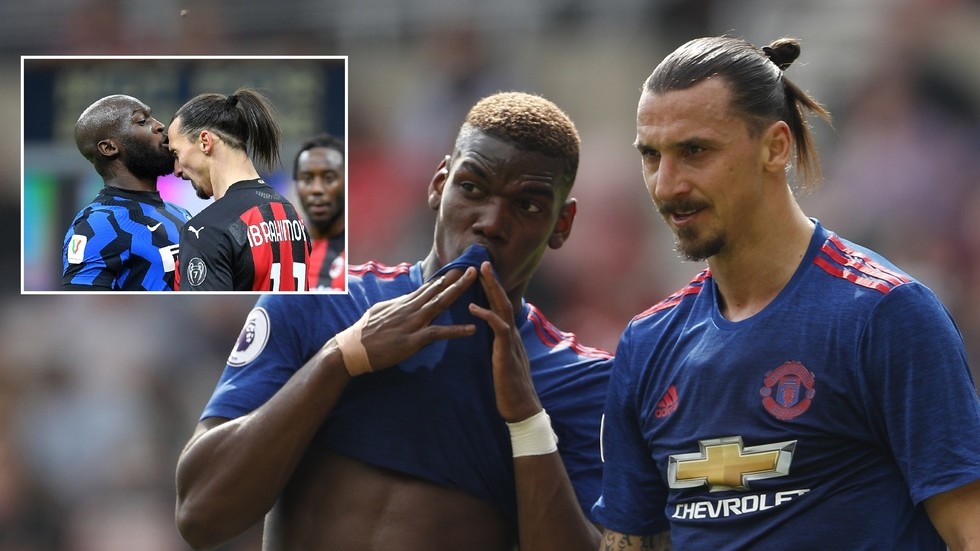 ‘He loves me too much’: Pogba says Zlatan isn’t racist after storm over ‘voodoo’ jibe to Lukaku

Paul Pogba has come out in support of Zlatan Ibrahimovic after the Swede was accused of racism for referencing “voodoo” in a bust-up with former Manchester United teammate Romelu Lukaku.

Tempers flared between Ibrahimovic and Lukaku as they lined up on opposite sides when AC Milan met city rivals Inter in the Coppa Italia quarterfinal at the San Siro on Tuesday night.

The two forwards exchanged words at the end of the first half before coming together to butt heads.

After Lukaku reportedly threatened Ibrahimovic that he would “see him inside,” the Swede was heard taunting Lukaku with the phrase “call you mother” and “go and do your voodoo,” also supposedly labeling him a “little donkey.”

This fight between Zlatan and Lukaku went too far I think 💀 pic.twitter.com/Gjgbv1JEkf

The row continued as the players went off toward the tunnel, with Lukaku yelling “f*ck you and your wife” at the AC Milan forward.

Ibrahimovic’s “voodoo” jibe was taken as a reference to claims made in 2018 by Everton shareholder Farhad Moshiri that Lukaku – who was formerly a player at the club – had consulted a witchdoctor to help decide on his next move away from the Merseyside club.

Lukaku denied the claims and later threatened to take legal action against Moshiri.

After Ibrahimovic revived memories of the row with his comments toward Lukaku, he was accused in some quarters of racism.

The Swede himself took to social media on Wednesday to deny any racist intent, and has now been backed by another former Manchester United teammate in the form of French midfield star Pogba.

“Zlatan… racist? He loves me too much so he’s the last person I’d think of as racist! Come on, don’t joke with that one!” Pogba tweeted to his 8.2 million followers.

Zlatan… racist? 🤨 He loves me too much so he's the last person I'd think of as racist! Come on, don't joke with that one! 🤣

Ibrahimovic has been defended by some fans over the remarks, but some picked up on the fact that Pogba and the Swede share the same agent, Mino Raiola.

Others claimed there was flawed logic in the Frenchman’s defence of his former teammate.

Sounds like "I am not against gay/lesbian/black, I have many friends among them".

“Zlatan… racist? 🤨 He loves me too much so he's the last person I'd think of as racist! Come on, don't joke with that one! 🤣” pic.twitter.com/WlN4oKWbSy

Lukaku, 27, joined United in 2017 when Ibrahimovic and Pogba were both already at the club, and the Belgian played just under a season with the Swede before he left for LA Galaxy.

Both are now in Milan on opposite sides of the city’s footballing divide, which has prompted tensions between the pair.

After Lukaku tweeted there was “a new king in town” in a dig at Ibrahimovic in February of last year after Inter won a derby clash, the veteran Swede later responded with the jibe “Milan never had a king, they have a God” after gaining revenge in the same fixture in October.

Tuesday’s fractious affair saw both players get on the scoresheet.

Ibrahimovic scored a first-half opener for AC Milan but then saw red for a second yellow card on 58 minutes, turning the tide in Inter’s favor.

Lukaku equalized from the penalty spot in the 71st minute before Christian Eriksen curled in a superb free-kick winner deep into injury time, handing Inter – and Lukaku – the bragging rights.

The teams next meet in Serie A on February 21 as both are in strong contention for Scudetto glory. AC Milan are currently top of the table, two points ahead of their city rivals.