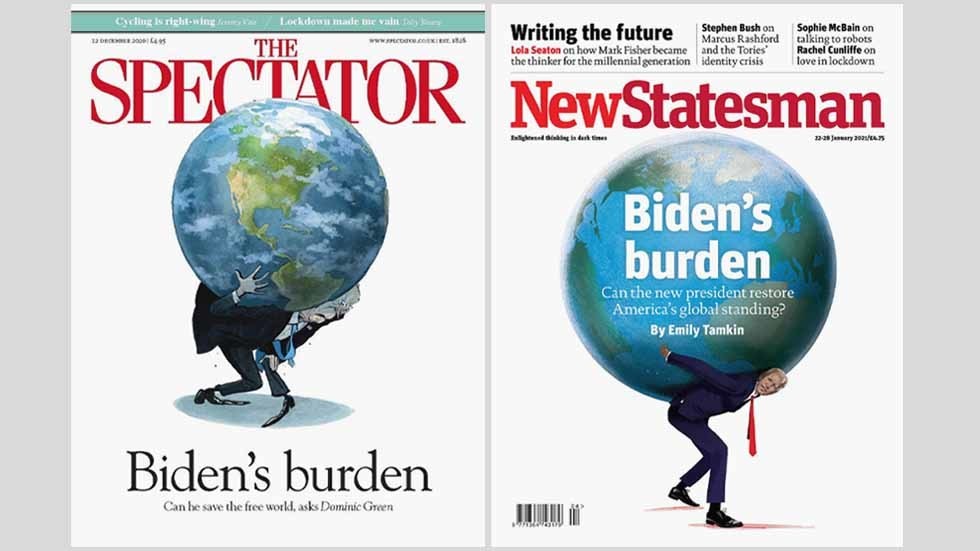 British liberal magazine the New Statesman has found itself under heavy scrutiny and the subject of mockery after ripping off a front cover – almost exactly – from conservative rival the Spectator.

The New Statesman unveiled its latest cover on Wednesday, showing a likeness of US President Joe Biden hunched over with a globe on his back. The image was captioned “Biden’s burden.”

While it drew some compliments, it wasn’t long before the Spectator’s deputy editor, Freddy Gray, pointed out on Twitter that it was a near-carbon copy of a December cover published by his own magazine.

The Spectator’s original cover also portrayed a hunched-over Biden with the heavy weight of a globe on his back, and even had the same caption, “Biden’s burden.” The only difference between the two was that the Spectator’s illustration was in more of a caricature style and showed Biden wearing a blue tie instead of a red one.

“Running out of ideas, are we?” asked one user, while another wrote, “I assumed that was the @spectator from last year, when I saw the picture. Still, imitation is the highest form of flattery.”

It’s not clear whether the copy was intentional and straightforward plagiarism, a subconscious mistake, or a total coincidence. The New Statesman has not commented publicly on the incident.

The stuff of nightmares? Fewer than 1 in 10 adults sleeping well during UK’s Covid lockdowns, study says