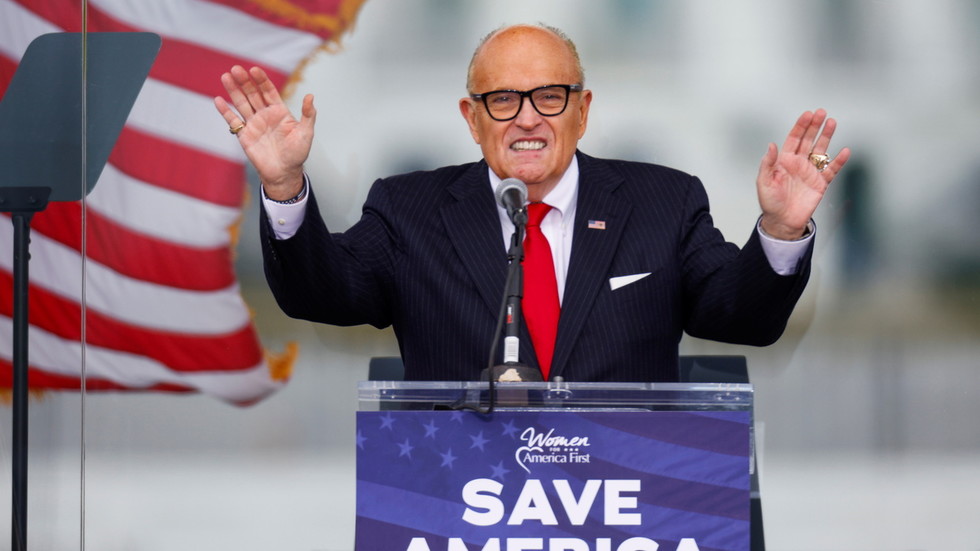 Donald Trump lawyer Rudy Giuliani has joined others in condemning the violence that took place at the US Capitol – but his comments are falling on deaf ears, as shortly before the breach he called for a “trial by combat.”

“The violence at the Capitol was shameful,” Giuliani tweeted on Thursday.

The former New York City mayor and current Trump lawyer compared the actions to the “rioting and looting” that took place at Black Lives Matter rallies over the summer, “which was not condemned nearly enough by the Left.”

“This violence is condemned in the strongest terms,” he added. “Our movement values respect for law and order and for the Police.”

The violence at the Capitol was shameful.

It was as criminal as the rioting and looting this summer which was not condemned strongly enough by the Left.

Our movement values respect for law and order and for the Police.

In a followup tweet that was slapped with a “disputed” disclaimer by Twitter, Giuliani said, “Our cause is to obtain an honest vote and to end voter fraud before it becomes a permanent tactic of the enabled and media protected Democrat Party.”

“Violence is rejected,” he continued, later adding that he believed there could have been radical left Antifa involvement in the Wednesday riot.

Our cause is to obtain an honest vote and to end voter fraud before it becomes a permanent tactic of the enabled and media protected Democrat Party.

Antifa involvement is no excuse.

It contradicts our values.

Giuliani’s words have only fueled anger, however, as liberal pundits pointed to him as part of the inspiration behind the chaotic scenes.

Speaking about an hour before the breach of the US Capitol first occurred, Giuliani spoke to a crowd of thousands of Trump supporters at the Save America rally, where the president also spoke, and suggested “trial by combat” when it comes to the president’s battle to prove election fraud.

“Your words inspired it,” Daily Beast editor Molly Jong-Fast tweeted to Giualiani after his condemnations.

Rudy Giuliani condemns violence yesterday. Yet the rally began with him calling for "trial by combat." He really is delusional. That will be his defense during his criminal trial.

You did this. You don't get to be above it. https://t.co/LVjY7Pnhep

Others have gone so far as to call for the arrest or investigation of Giuliani, including MSNBC host Joe Scarborough, who launched into a profanity-laced tirade about the US Capitol breach during his show on Thursday.

Rudy should be arrested, too. https://t.co/GVol2gqtxt

Start here: Reams and hours of video and audio evidence

Though Giuliani’s “trial by combat” comment set off alarms with critics even before the rioting began, his full speech did not appear to be referring directly to violence, but rather to putting reputations on the line.

“If we are wrong, we will be made fools of. But if we’re right, a lot of them will go to jail,” Giuliani told the crowd when speaking about election fraud. “So let’s have trial by combat. I’m willing to stake my reputation. The president is willing to stake his reputation on the fact that we’re going to find criminality there.”

Rudy Giuliani says "I'm willing to stake my reputation” on the fact that there is election fraud:

“Let’s have trial by combat.” pic.twitter.com/Bhbx6fnPcq

Israel to send 5,000 doses of Covid-19 vaccine to Palestinians, overturning its much-criticized refusal

Reporter who tried to cancel NFL coaching candidate for anti-gay remark in college is outed for his own racist, homophobic tweets