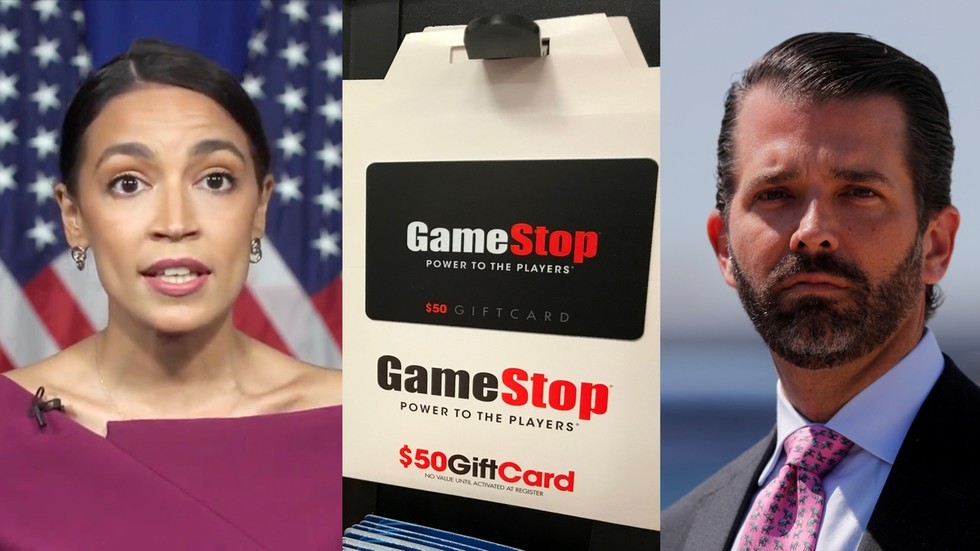 The GameStop stock rebellion is playing out like a revealing Rorschach test, drawing political figures as divergent as Donald Trump Jr. and Alexandria Ocasio-Cortez together, and prompting legacy media to demonize the uprising.

The former president’s son responded to ruling-class efforts to crush the rally, including Thursday’s move by trading app Robinhood to ban its users from buying shares of GameStop and other stocks targeted by grassroots investors, by saying, “This is what a rigged system looks like.” Trump Jr. tweeted: “It took less than a day for Big Tech, Big Government, and the corporate media to spring into action and begin colluding to protect their hedge-fund buddies on Wall Street.”

It took less than a day for big tech, big government and the corporate media to spring into action and begin colluding to protect their hedge fund buddies on Wall Street. This is what a rigged system looks like, folks! #RobinHood #RedditArmy #GME #GMEtothemoon https://t.co/UhrwGHCjng

From the opposite side of the political spectrum, US Representative Ocasio-Cortez (D-New York) cheered the rally that has caused GameStop shares to soar, running up more than $14 billion in losses for hedge fund Melvin Capital and other big-money investors who had tried to drive the stock down through short-selling. “Gotta admit, it’s really something to see Wall Streeters with a long history of treating our economy as a casino complain about a message board of posters also treating the market as a casino,” Ocasio-Cortez said.

Observers such as Barstool Sports founder Dave Portnoy noted the irony of a Wall Street response so anti-American that it united populists on the political right and far left. “When AOC and Donald Trump Jr. are on the same side, you know you f**ked up, Robinhood,” Portnoy said.

When @AOC and @DonaldJTrumpJr are on the same side you know you fucked up @RobinhoodApp pic.twitter.com/y15FBqrUu9

The GameStop episode has also spurred a telling response by mainstream media outlets, which have sounded alarms over the hedge-fund bloodbath and painted the Reddit message-board users who instigated the buying binge as dangerous and even bigoted.

For example, CNN has blamed the coordinated buy campaign by “amateur” investors on “Trumpism,” a term now synonymous with “domestic terrorism” in media-speak as the press also works to demonize Donald Trump voters at large. The outlet chided the little people who dared to revolt: “Sticking it to the man will only get you so far. It’s not a solution to any problem.”

@CNN there were some really worthy contenders on #GME today but this has gotta be the absolute worst take out therehttps://t.co/VQTT7Gk108

The Financial Times on Thursday vilified members of the Reddit message board that largely drove the uprising, called WallStreetBets, as “alt-right” – in other words, racist monsters. A backlash forced the elitist newspaper to tweak its article, saying it had removed “a speculative reference” to alt-right. One member of the subReddit gave an irreverent translation of the FT’s clarification: “We’re sorry for our trashy journalism standards, which sit below that of a rabble of degenerate gamblers.”

The Wall Street Journal also posted a hit piece on Thursday, quoting a man it identified as the subReddit group’s founder as saying some its moderators are “straight-up white supremacists” because he found racist and anti-gay language in an “off-Reddit chat room associated with WallStreetBets.”

Such media coverage was used as a pretext by another chat app, Discord, to ban WallStreetBets for allowing “hateful and discriminatory content.”

Brokerages such as TD Ameritrade, Interactive Brokers Group and Charles Schwab also restricted trading of GameStop and other shares favored by the rebels, including AMC Entertainment Holdings.

Those tactics apparently helped halt the rally, at least temporarily. GameStop rallied from its December 28 close of $20.99 to as high as $483 on Wednesday, but it dipped as low as $112.25 on Thursday. As of 3 p.m. New York time, the stock was trading around $250, down 28 percent from Wednesday’s closing price.

But the financial rebellion isn’t likely over. “Robinhood blocked trading of GameStop and AMC, so people are now turning to trade on Webull, a Chinese-owned trading platform,” Yahoo Finance anchor Zack Guzman said. “The free market is so free, we are turning to China.”

Robinhood blocked trading on GameStop and AMC so people are now turning to trade on Webull, a Chinese-owned trading platform

The "free market" is so "free" we are turning to China

However, even Webull was forced to halt trading of GameStop and two other stocks on Thursday morning, saying the extreme volatility of the share prices was beyond the capacity of its clearing service to handle. But by early afternoon, the firm announced that trading was no longer restricted.

The unifying power of GameStop shares apparently has its limits. Ocasio-Cortez called Robinhood’s halt to trading “unacceptable” and suggested that a congressional hearing should be held to investigate why retail investors were blocked from trading, while hedge funds were free to invest as they saw fit. After Senator Ted Cruz (R-Texas) replied by saying “fully agree,” Ocasio-Cortez ruled out cooperating with him because he challenged President Biden’s electoral victory, which she blamed for the January 6 Capitol riot.

I am happy to work with Republicans on this issue where there’s common ground, but you almost had me murdered 3 weeks ago so you can sit this one out.

Happy to work w/ almost any other GOP that aren’t trying to get me killed.

In the meantime if you want to help, you can resign. https://t.co/4mVREbaqqm

Trump's Christian supporters and the march on the Capitol