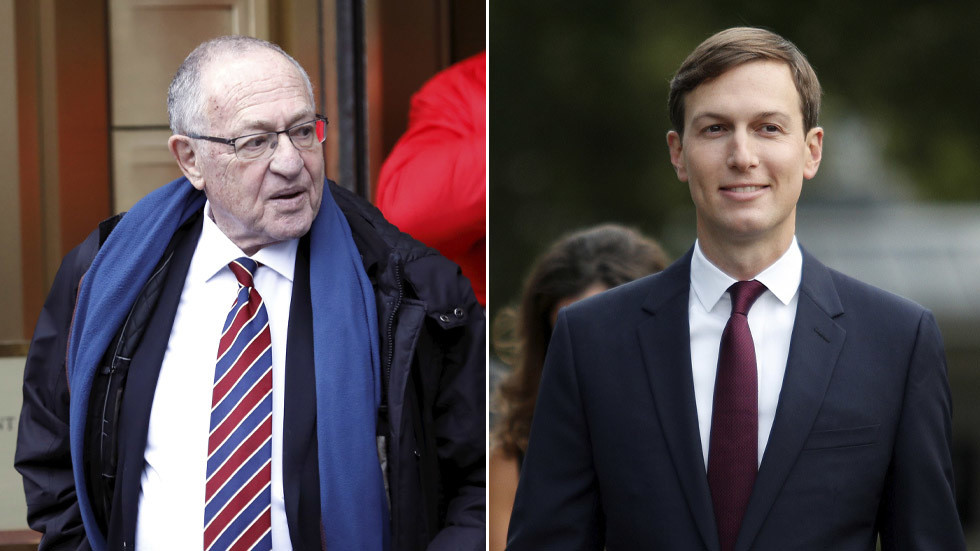 Kushner was nominated for the prize on Sunday by Alan Dershowitz, who worked as a lawyer for Trump, as well as the late serial sex offender Jeffrey Epstein. He was put forward for his work setting up the controversial Abraham Accords between the United States, Israel, the United Arab Emirates, and Bahrain.

Nominating Jared Kushner for the Nobel Peace Prize is like awarding a Michelin star to Jeffrey Dahmer. 🤦‍♂️ https://t.co/3B2r1WWJol

Others took aim at Dershowitz for nominating Kushner, referencing the fact that he previously defended Jeffrey Epstein in court and admitted to receiving a massage at Epstein’s residence in his underwear. Dershowitz himself has been accused by one of Epstein’s victims of having sex with her on a number of occasions.

“Today I nominate Alan Dershowitz to lose his ability to nominate anyone for a Nobel Prize until he’s been cleared of all wrong doing in his criminal dealings with Jeffrey Epstein,” Pennsylvania State Representative Brian Sims tweeted in response to the nomination.

The missing headline here is that Alan Dershowitz is still somehow considered a qualifying nominator for the Nobel Peace Prize. https://t.co/fsCwKzd29R

Government officials, professors, and foreign policy institution directors, among others, are able to nominate anyone of their choosing for the Nobel Peace Prize. Dershowitz has the power to do so as a Harvard Law School professor emeritus.

Kushner and his deputy, Avi Berkowitz, were nominated for the Peace Prize over their negotiations of the 2020 Abraham Accords, a series of symbolic normalization agreements signed between Israel, the United Arab Emirates, and Bahrain. The Abraham Accords were derided by critics as a PR stunt at the expense of Palestinians.

“What are the Abraham Accords but a publicity stunt designed to reward Israel for its breach of international law?” Samer Hassan wrote in the Jewish magazine Forward in September. “All ruthless governments work together. This has been the case for Israel, the United Arab Emirates, and Bahrain for years. Now, it is just out in the open.”

The Nobel Peace Prize has previously been awarded to many controversial figures, including former President Barack Obama and former US Secretary of State Henry Kissinger.

Myanmar coup: How the military disrupted the internet

Nigeria’s school abductions: Why children are being targeted

Chilean president slapped with $3,500 FINE & ‘turns himself in’ after no-mask selfie with stranger stokes public backlash