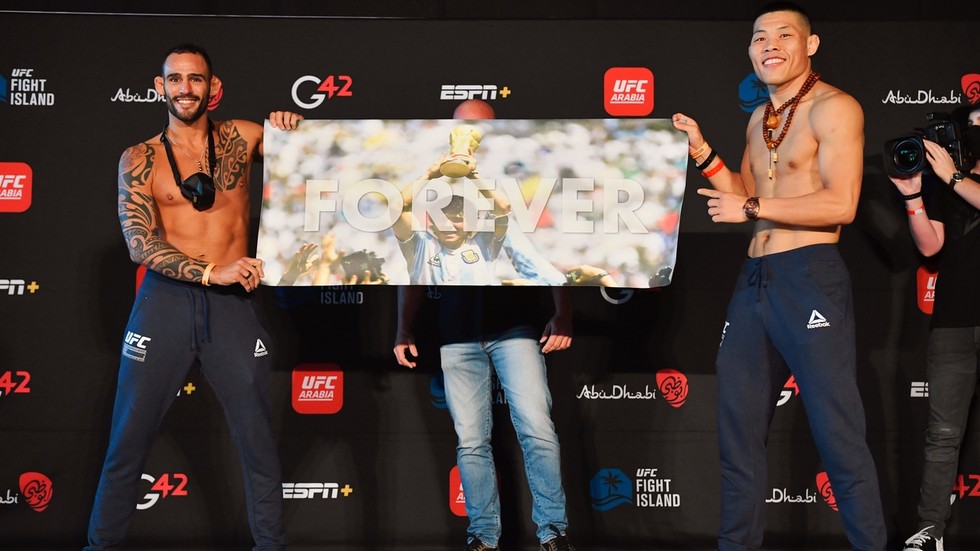 Friday’s official weigh-ins for the first UFC event of 2021 were particularly poignant for one fighter, as Argentina’s Santiago Ponzinibbio made weight before paying tribute to recently-departed football legend Diego Maradona.

Ponzinibbio came inside the limit with ease for his welterweight bout against China’s Li Jingliang and, during the faceoff with his opponent, produced a banner honoring the 1986 World Cup-winning captain, as the two fighters joined forces to hold the tribute up for the cameras.

The event will be an emotional one for Ponzinibbio for other reasons, too. The Argentine ace, who looked to be well on his way toward a title shot at 170 pounds, suffered a staph infection that put him out of action.

After he recovered, he then discovered a bone infection that threatened to end his entire career.

Now, two years after his last fight, Ponzinibbio is ready to return and will attempt to add to his seven-fight win streak by defeating Jingliang and catapulting himself back into contendership once again.

Myanmar military says it takes charge of country for ONE YEAR, declaring state of emergency over alleged 'election fraud'

The woman who took on Google and won

‘As if it was Baghdad’: US Secret Service creates fortified ‘Capitol Green Zone’ ahead of inauguration