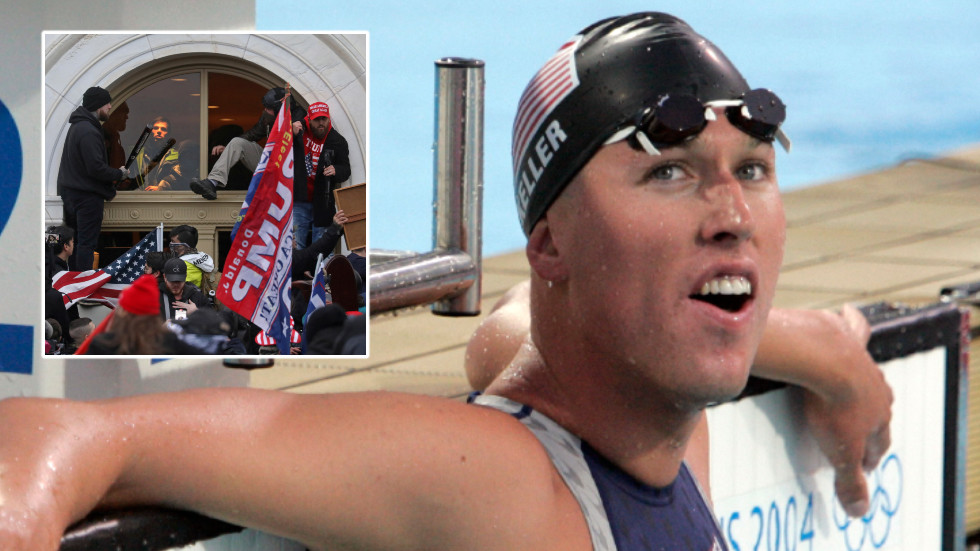 US Olympian Klete Keller has deleted social media accounts in which he regularly posted in support of Donald Trump, reacting after he was spotted participating in online video footage from last week’s deadly riots at the Capitol.

Keller, who represented the United States at three successive Olympic Games between 2000 and 2008, was identified inside the Capitol Rotunda alongside throngs of other Trump supporters in the scenes which have drawn widespread criticism from both the domestic and international communities.

The 6ft 6in athlete was partially identified by the ‘Team USA’  jacket he was wearing from the 2018 Winter Games in PyeongChang.

Keller’s name was reported to authorities as part of a wide-ranging investigation to determine the identities of several hundred rioters and protestors, some of whom are being charged with a range of crimes, many of which range in severity. Five people, including a police officer, lost their lives in the fierce clashes.

The maskless Keller is seen in footage among a group of Trump supporters pushing against law enforcement officers inside the building.

“We were not aware of this and cannot confirm its accuracy,” a statement from USA Swimming announced Monday.

“We respect private individuals’ and groups’ rights to peacefully protest but in no way condone the actions taken by those at the Capitol last week.”

@TeamUSA he needs to be expelled from the olympic team and not able to compete any more. He doesn't represent the USA.

Is this a thing?… Why? It seems totally unrelated, I'd rather see someone who won an olympic medal, but was later convicted for whatever crime they did, than stripped of recognition for something good they actually did, but not be punished for something bad they did later.

This is simple. @TeamUSA, @USASwimming must insist @olympics strip Klete Keller of his Olympic Swimming Medals. Today. He has dishonored his sport and his nation. pic.twitter.com/KPbk6mTwVy

According to reports, Keller has been working for real estate firm Hoff & Leigh in Colorado Springs. His name and information is no longer listed on their website as of late Monday, although owners of the company have not responded to press requests related to this.

Keller is one of the most decorated athletes in USA Swimming history. He was a member of the US 4x-200 freestyle relay alongside iconic swimmer Michael Phelps, famously pipping Australia’s Ian Thorpe in a close finish in the 2004 games in Athens to win gold for his country.

He helped his team to a defence of the title four years later in Beijing, and also won a further silver and two bronze medals during his celebrated career.

Keller’s association with the riots marks him as the latest public figure to have been censured following the violent scenes in Washington DC.

Another attendee at the protests, UFC Hall of Fame fighter Pat Miletich, was informed that he was being dropped from his commentary duties at Legacy Fighting Alliance.

President Trump has also felt the wrath of the sports world, as the PGA opted to strip his Bedminster club of hosting duties for the 2022 PGA Championship.

Legendary New England Patriots head coach Bill Belichick announced on Tuesday that he was turning down Trump’s offer of a Presidential Medal of Freedom – the highest honor available to US citizens.

US has conceded too much to Taliban, says Afghan vice-president