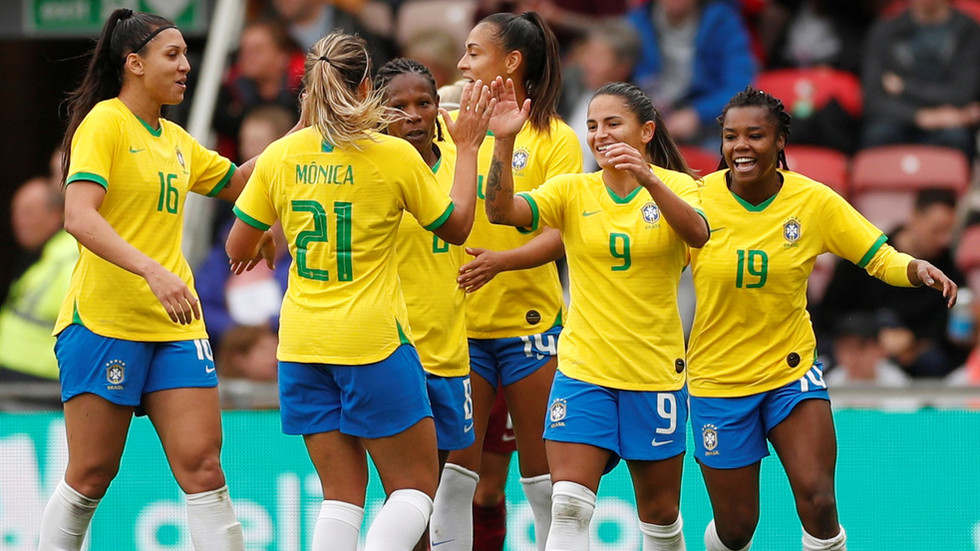 The Brazil women’s football team has endured mockery on social media after reportedly being beaten 6-0 by a club side’s male under-16s in an hour-long training game, leading to a barrage of replies about the row over equal pay.

Top-flight Brazilian side Gremio sent a team of teenage boys to face the women’s national side as part of their preparations for the imminent Olympic football tournament side in Tokyo, seeing off a team that included six-time FIFA best women’s player and World Cup record goalscorer Marta over two 30-minute periods.

The score was kept inconspicuous on official accounts, although coach Pia Sundhage admitted to the official website that matching “very fast” opponents in the “male category” had been a “challenge”.

“When we play big teams, who are very fast, we will have this type of challenge,” reflected the Swede.

“The game was also important for us to evaluate the players individually. We had some situations of one against one, protection of the ball and needing to react quickly in these situations. It is a good way to improve and be ready for the great challenges of 2021.”

The result evoked memories of the USA Women’s national team’s (USWNT) 5-2 defeat against a male side in a friendly in 2017, when the 2019 World Cup winners lost to FC Dallas’s under-15s team.

The USWNT has been pushing for equal pay as part of a wider push for female international sides to receive the same renumeration as their male counterparts, and critics who read of Brazil’s result were quick to refer to that row.

Surely now the under 16s deserve equal pay to the women?????

“Feminists will go crazy,” said one, while others asked outspoken USWNT team superstar Megan Rapinoe for her thoughts on the score and said that the victorious under-16s deserved the same pay.

“However, they are top of their chosen sport. I’m guessing all the lads on here are just p*ssed off [amateur] players.”

News of the result came on the same days as reports of former USWNT goalkeeper Hope Solo’s views on equal pay.

Solo told a BBC podcast that the team’s wage battle should be taken to “politicians, congress and the United States Senate”.

She also offered stinging criticism of team culture, saying: “Most players have come from rich, white families. That is the culture of the USWNT.

“It is a very privileged, white culture. I remember Carli [Lloyd, striker] and I always talking about the culture, ‘we have to change this culture’.

“We were very nice to the young kids coming in, but I think it’s because we were bullied. We always wanted to change that culture, but ultimately I’m not sure we succeeded.”

The Telegraph said it had approached the US Soccer Federation for comment.

In pictures: Troops guard US Capitol, one week after riots