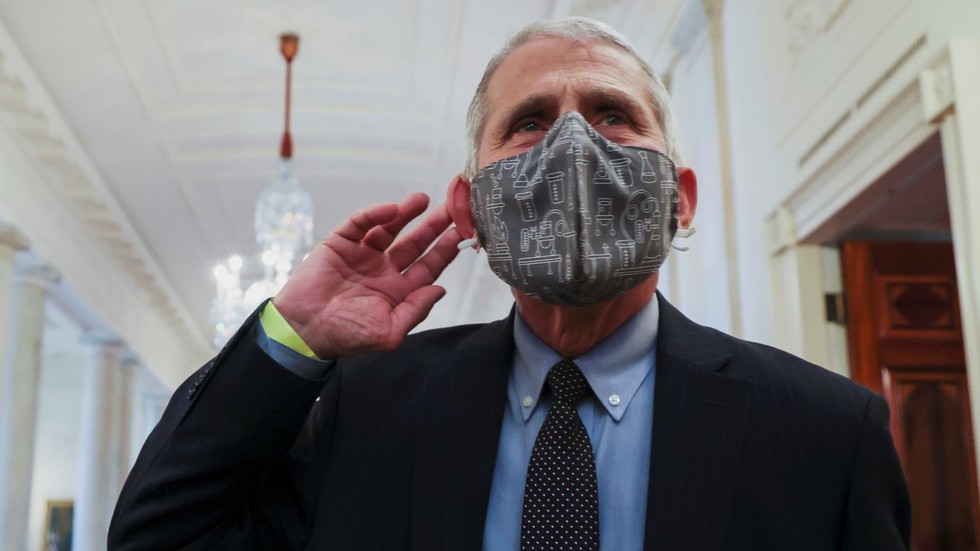 Fauci flip-flops again, says there's NO DATA to indicate that wearing multiple masks is beneficial in fighting spread of Covid-19

Just when he seemed to be a proponent of the double-masking fad, US Covid-19 czar Dr. Anthony Fauci has again reversed his expert advice, saying there is “no data” to show that multiple masks provide increased virus protection.

“There are many people who feel, ‘You know, if you really want to have an extra little bit of protection, maybe I should put two masks on.’ There’s nothing wrong with that, but there’s no data that indicates that that is going to make a difference. And that’s the reason why the CDC has not changed the recommendations.”

Fauci made his comments in a livestreamed conversation late last week with leaders of major US teachers unions. The video surfaced on social media on Sunday. The media darling’s statement appeared to reverse comments he made just a few days earlier, when he said in an NBC News interview that “it just makes common sense” that double-masking is more effective than wearing a single mask. By just a day later, the experts seemed to be in a game of one-upmanship, with NBC quoting another doctor saying three or even four masks would provide greater filtration, though such a strategy could backfire because increased discomfort could force the wearer to remove the fortress of face coverings.

Multi-masking has become increasingly prevalent in recent weeks as politicians and other mask advocates have put on additional layers to seek added protection or send a safety-prowess message. The New York Times even declared last week that “Two masks are the new masks” and praised the likes of Pete Buttigieg and his husband for double-masking at President Joe Biden’s January 20 inauguration.

Fauci’s turnabout perhaps throws a little cold water on the fashion trend, as mainstream media outlets treat the 80-year-old doctor almost like a religious figure when it comes to his Covid-19 directives. But it was just the latest in a long line of flip-flops on pandemic guidelines.

In December, for example, Fauci admitted to lying about herd-immunity targets to manipulate public opinion about Covid-19 vaccines. He said last March that there was no need for the general public to wear masks to prevent the spread of the virus, then called in October for a national mask mandate. So on the subject of masks alone, he’s gone from zero to one to two to one.

It’s not altogether clear which of those recommendations was on target. Dr. Michael Osterholm, an infectious-disease expert who served on Biden’s Covid-19 advisory board, said Sunday in an NBC interview that double-masking could cause more infections because more air would likely be forced to escape through gaps around the sides of the masks because it would be harder to pass through the filters.

“Think about your swim goggles,” Osterholm said. “When was the last time anybody leaked at the lenses? They leak at the fit.” It doesn’t help, he added, that as many as one-fourth of people wear masks under their noses. “That’s like fixing three of the five screen doors in your submarine. What’s going on there? We’ve got to get people to start using these right.”

Why did bitcoin suddenly erase all of this year’s gains? RT’s Boom Bust has the answer