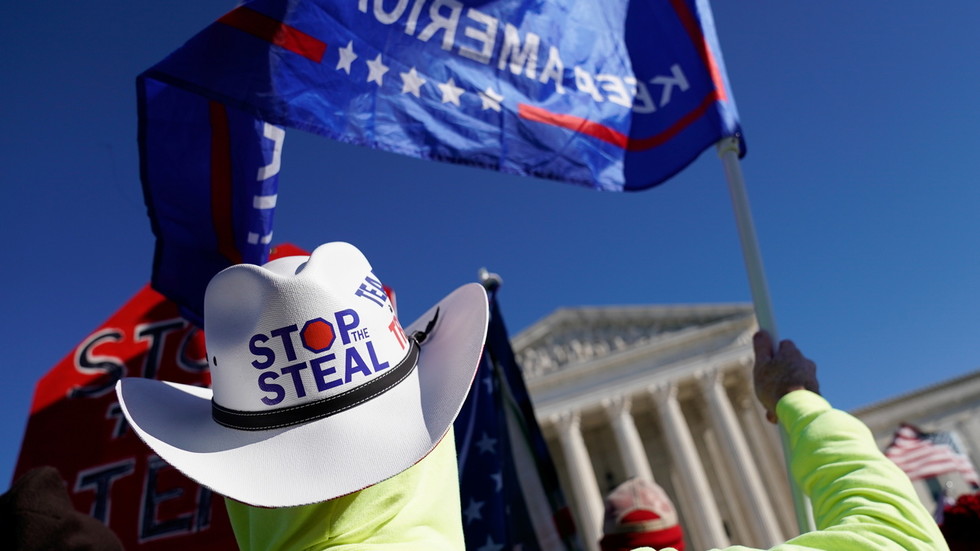 Citing the upcoming inauguration of Democrat Joe Biden, Facebook has banned the phrase “stop the steal,” used by supporters of outgoing President Donald Trump to question the 2020 election, saying it could incite violence.

Any content with the blacklisted phrase is being removed from Facebook and Instagram, under the Coordinating Harm policy, the company announced on Monday evening. VP for Integrity Guy Rosen and VP for Global Policy Management Monika Bickert claimed that the phrase was used “by those involved in Wednesday’s violence in DC” and cited “continued attempts to organize events against the outcome of the US presidential election that can lead to violence,”

“We’re taking additional steps and using the same teams and technologies we used during the general election to stop misinformation and content that could incite further violence during these next few weeks,” Rosen and Bickert wrote.

In addition to the “indefinite suspension” of President Trump’s account announced on Thursday, Facebook is keeping the temporary ban on all US political advertising and “connecting people with reliable information and high-quality news about the inauguration and the transition process.”

“After the inauguration, our label on posts that attempt to delegitimize the election results will reflect that Joe Biden is the sitting president,” wrote Bickert and Rosen.

For months, social media giants have labeled any post challenging the validity of the 2020 presidential election as “disputed” or challenged by their coterie of fact-checkers. Last Wednesday’s unrest at the Capitol provided them a pretext to purge accounts outright, including the president himself.

“Stop the Steal” was a hashtag used by some Trump supporters to question the election results according to which Biden surged from behind to win the most votes in US history, thanks to mail-in ballots. A rally by that name was held outside the White House on Wednesday. Several hundred Trump supporters peeled off and stormed the Capitol, interrupting the joint session of Congress that met to certify Biden as the victor. One person was fatally shot, while the deaths of four more – including a Capitol Police officer – have been linked to the protest, without details.

In addition to deleting any content that mentions the phrase, Facebook is keeping indefinitely several measures introduced last week – such as “automatically disabling comments on posts in Groups that start to have a high rate of hate speech” and using AI “to further demote content that likely violates our policies.”

Among those caught up in the purges is WalkAway, a group of former Democrats who supported Trump, who said they were entirely peaceful and in no way connected to events at the Capitol, but to no avail.

The outright deletion of content before Biden is even inaugurated is an escalation from Facebook’s actions prior to the election, when they “shadowbanned” all mention of a New York Post story about Biden’s son Hunter and the incriminating emails found on a laptop recovered from a Delaware repair shop. Twitter had locked the Post’s account, but it later emerged that Facebook’s soft censorship turned out to be far more effective.

Harvard astronomer says alien technology visited in 2017, may have been distant civilization’s trash

Myanmar coup: Medics to strike as anger at military grows