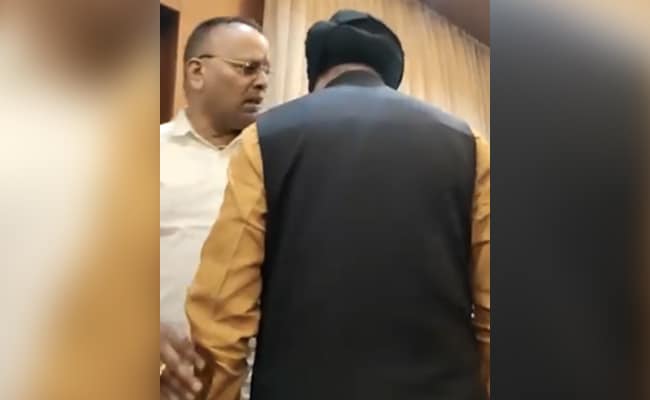 Ajay Chandrakar and Bhupendra Sawanni had an argument at the meeting

Former Chhattisgarh minister and BJP leader, Ajay Chandrakar, on Sunday accused a senior party colleague of sycophancy, and appeared to be threatening him, at a meeting also attended by Union Minister Hardeep Singh Puri and former chief minister Raman Singh.

“Go be a sycophant…Behave with me properly else I will set you right,” he is seen telling the state BJP office bearer Bhupendra Sawanni in a viral video.

Mr Puri was today in Chhattisgarh to highlight the Budget announcements made by the centre for the state earlier this month. He was chairing a meeting of all senior party leaders and office bearers when the incident took place.

Mr Chandrakar and Mr Sawanni were also present at the meeting. According to sources, they had an argument over something after which the leader lost his cool.

Sources say the senior leaders present at the meeting tried to pacify Mr Chandrakar but he stormed out.

In 2018, the Congress had formed the government in Chhattisgarh after scoring a landslide victory in the assembly election.

In 2019, two BJP lawmakers from Uttar Pradesh had fought each other with fists and shoes at an official meeting. The video was widely circulated on social media.