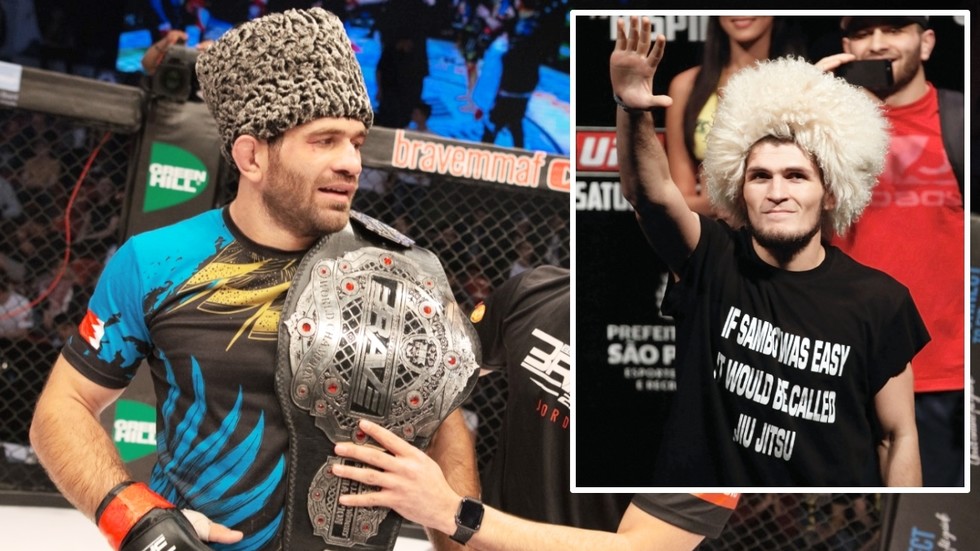 Eldar Eldarov, the man behind Khabib’s famous Sambo T-shirt joke in Brazil, is all set to put his own world title on the line as he prepares for action at Brave CF 46 in Sochi.

Eldarov is a longtime teammate of Khabib and protege of Khabib’s late father, Abdulmanap, and has enjoyed success fighting for the Bahraini MMA organization Brave CF, where is currently the organization’s 165-pound super lightweight champion.

Eldarov is set for action in the main event as Brave CF stages its first event on Russian soil, Brave CF 46, on January 16 in Sochi.

It’s an opportunity for the promotion to gain further traction as it looks to grow its presence across the world, and they view Eldarov as the perfect man to headline the historic first card in Russia, as he puts his title on the line against Brazil’s former UFC welterweight Leonardo Mafra.

Eldarov’s only career defeat came against Khabib in his second career fight, but the Russian, who also represents Bahrain as part of the KHK Fight Team, has been perfect ever since, and heads into next weekend’s event with a record of 12 wins, 1 defeat.

He has also played a part in Khabib’s success, and was a notable presence in his corner when Khabib went to Sao Paulo, Brazil to take on Thiago Tavares in only his third UFC appearance.

While in Brazil, Eldarov famously instigated a joke involving a T-shirt that bore the phrase, “If Sambo Was Easy, It Would Be Called Jiu-Jitsu.”

The slogan certainly drew plenty of attention, as Nurmagomedov then showcased his special brand of grappling to finish Thiago Tavares on the mat with ground and pound to score his third straight win and move him up the UFC’s lightweight ladder.

“The person who put this phrase on the T-shirt was me,” recalled Eldarov, as he spoke to Brave CF ahead of his upcoming bout.

“I got the idea for the phrase when I went for judo training and saw someone wearing a T-shirt with the phrase ‘If judo was easy it would be called football’. I was set to go to Brazil to corner Khabib at the time. So I bought a black T-shirt and printed the phrase on it. He wore it on the weigh-ins.

“As soon as we got back to the hotel and turned on the wi-fi, we were bombarded with messages from people talking about the T-shirt.

“It became very controversial, some people even went to the extent of giving death threats. It wasn’t intended to be offensive, it was just a joke. At the end of the day, we respect all sports.”

Eldarov’s own sambo background includes a silver medal in the Sambo World Cup, and he’ll be keen to utilize those ground skills against Brazilian opposition when he takes on Mafra in the main event in Sochi.

The event will also feature other notable Russian MMA stars, including former UFC flyweight title challenger Ali Bagautinov, who returns to the sport after a one-year hiatus.

‘It’ll be better this time’: Boxing icon Mike Tyson confirms he will ‘absolutely’ hit the comeback trail again in 2021