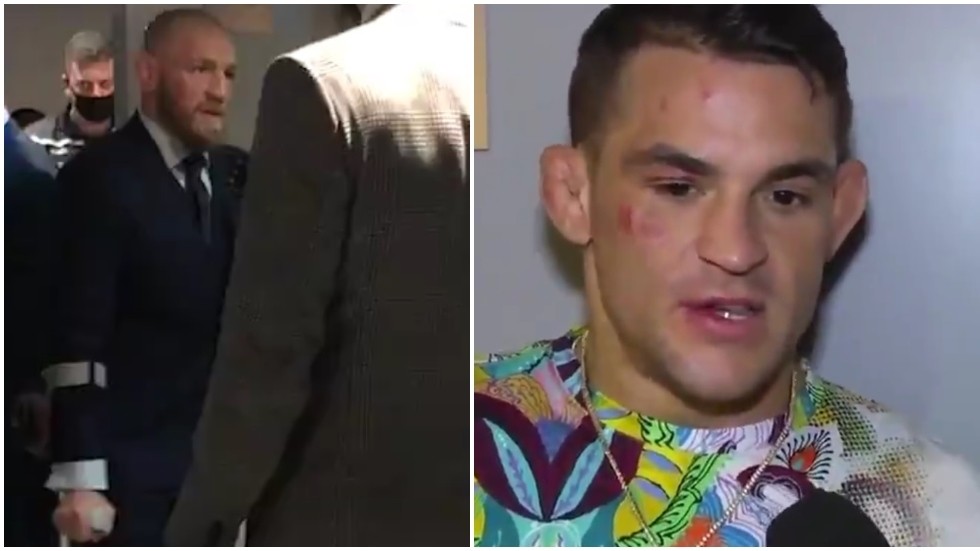 Dustin Poirier’s victory over Conor McGregor at UFC 257 may have ended in an explosive flurry of punches but the brutal calf kicks dished out by the American helped pave the way for his knockout success.

Poirier finished McGregor with a barrage of big shots midway through the second round at the Etihad Arena on Fight Island in Abu Dhabi, but the Irishman would later say he had first been disabled by the excruciating damage done by kicks to his lower right leg.

“That calf kick. I’ve never experienced that, and it’s a good one,” McGregor said after arriving at his post-fight press duties hobbling and with the aid of a crutch.

“My leg is completely dead. Even though I felt like I was checking them, they were just sinking into the muscle at the front of the leg and it was badly compromised.

“It’s like an American football in my suit at the moment… The leg was compromised and I didn’t adjust. And that’s it. Fair play to Dustin and I’m very happy for him.”

All respect between Conor McGregor and Dustin Poirier after #UFC257.

You can see the damage those leg kicks did 😳 pic.twitter.com/6m9SJeCpkg

Speaking to ESPN’s Brett Okamoto, Poirier and coach Mike Brown detailed the thinking behind the calf kicks which helped the lightweight star avenge the defeat he suffered at McGregor’s hands in their first fight back in 2014.

“[Dustin] kicks hard as f*ck,” Brown joked before the 32-year-old Poirier laid out the strategy in more depth.

“I kick hard and Conor has a wide stance, so we thought it would be hard to check,” the fighter said.

“I started kicking through his check, because he wasn’t checking correctly, it was still the muscle part of his calf, he wasn’t turning his shin all the way outward, so it wasn’t shin to shin.”

“Even when he checked, he was getting the bad part of the kick.

“And I know from experience, I’ve been crippled with those kicks from Jim Miller, I’ve been hurt with those a few times, the swelling in your calf has nowhere to go, it’s not like in your thigh where it can spread out, you get compartment syndrome and the swelling gets stuck in pockets, and it’s so painful.”

Following a KO, Conor McGregor left the locker room on a single crutch after #UFC257

McGregor certainly felt the effects long after the bout, later sharing a picture of himself with his injured leg elevated as he relaxed on a yacht.

The Irish former two-weight champion has issued a call for a trilogy with Poirier, although with lightweight king Khabib Nurmagomedov expected to vacate his title, UFC boss Dana White has suggested he would look to book ‘The Diamond’ in a scrap for gold with new arrival Michael Chandler.

READ MORE: ‘New king in town’: Michael Chandler DESTROYS Dan Hooker inside one round at UFC 257, calls out Khabib

Making his UFC debut, three-time former Bellator champion Chandler scored a spectacular win of his own in the co-main event on Fight Island, finishing the usually resilient Dan Hooker inside the first round.

Whoever Poirier faces next, they can’t say they haven’t been forewarned about the devastating calf kicks in his formidable arsenal.

Ozil and out: Arsenal outcast Mesut Ozil bids farewell – and vows 'no grudges' after ignominious end to life at Gunners