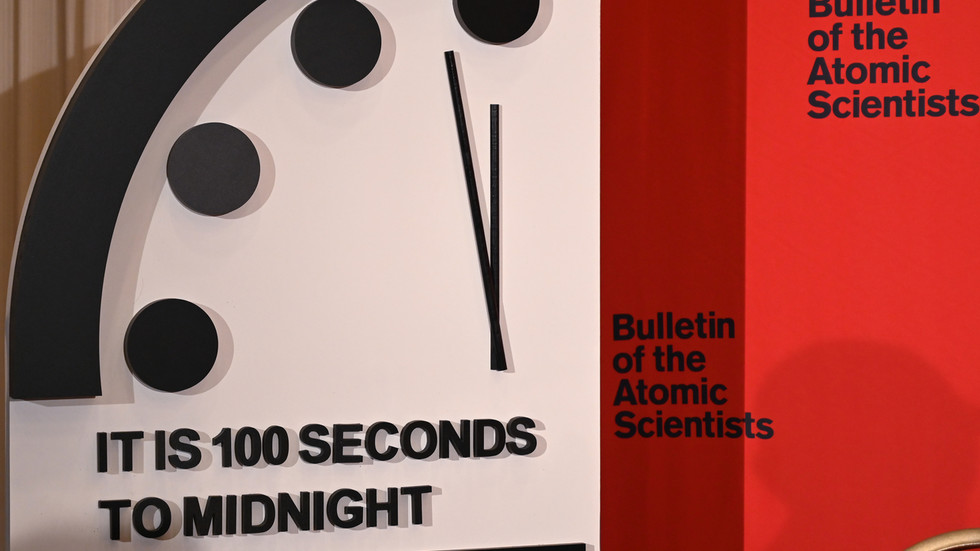 The Bulletin of Atomic Scientists’ “Doomsday Clock” – a construct representing the threats to humanity from the nuclear to the natural – remains in the red at 100 seconds to midnight for 2021, its proprietors have warned.

The scientists released their annual forecast on Wednesday, highlighting a resurgent nuclear arms race, climate change, and online misinformation about the Covid-19 epidemic as three existential threats humanity must face down if the species is to survive.

While the clock’s hands haven’t moved since 2020, when it ticked into its current position, the scientists behind it have cautioned urgently against allowing the current state of affairs to settle in as a “new abnormal.”

While the Treaty on the Prohibition of Nuclear Weapons took effect earlier this month, the 50 countries that signed it have no nukes themselves – and the treaty is an effort to push their nuclear-armed neighbors toward disarmament. As of 2019, all of those nuclear-armed neighbors were working on modernizing their arsenals. The bulletin called on nuclear-armed nations – especially the US – to resist the temptation to beef up their nuclear programs and take disarmament seriously, warning that the potential for “stumbling” into nuclear war has never been greater.

Climate change, too, remains a dire threat, despite a drop in emissions in the early months of the pandemic. With several nations on the road to recovery already, “emissions have largely bounced back,” the scientists pointed out, a problem that will only increase as more economies reopen. Citing wildfires and cyclones over the past year, they urged countries to direct stimulus funds toward green energy, chiding the International Monetary Fund and the World Bank for essentially sabotaging low-income countries’ efforts to clean up their energy production by weighting aid packages heavily toward fossil fuels.

Alongside these more concrete threats, the atomic scientists saw fit to throw in the Covid-19 “infodemic,” described by the World Health Organization as “an over-abundance of information … that makes it hard for people to find trustworthy sources and reliable guidance when they need it.”

Ironically, they said Covid-19 itself is not an existential threat to humanity, taking a far more level-headed view of the virus, while depicting ‘too much information’ as a potentially apocalyptic catastrophe.

The Doomsday Clock scientists blame social media and its business model built on emotionally manipulating its users for the “internet-fueled undercutting of rational discourse and policy-making.” They also skewer governments for politicizing the response to the virus.

Disinformation running rampant on the internet has not only hampered governments’ ability to respond to the pandemic, but “could have even more drastic consequences in a nuclear crisis,” they said – a situation that could perhaps lead to “a nuclear war that ends world civilization,” the scientists warn, noting that the climate-change debate has already been similarly polarized.

If humanity is to avoid an existential catastrophe – one that would dwarf anything it has yet seen – national leaders must do a far better job of countering disinformation, heeding science, and cooperating to diminish global risks.

While governments owe it to their constituents to communicate honestly and effectively, few people really expect them to do that, public relations firm Edelman’s recent ‘trust barometer’ survey found earlier this month. Nor do people expect the truth from the media, it found – a situation that does not bode well for the scientists trying to rescue the reputation of both institutions.

‘I can knock Ben out faster than Masvidal did’: YouTuber Jake Paul hopes to channel UFC’s ‘BMF’ in boxing match with Askren

Could a vaccine get rid of malaria for good?

‘When everyone is chipped’: Russian boxing champ jokes about conspiracy theory and calls masks ‘depressing’ as he plots next fight