Home > WORLD > Don Jr. joins Telegram, says Big Tech can deplatform him ‘just like that’ at any time 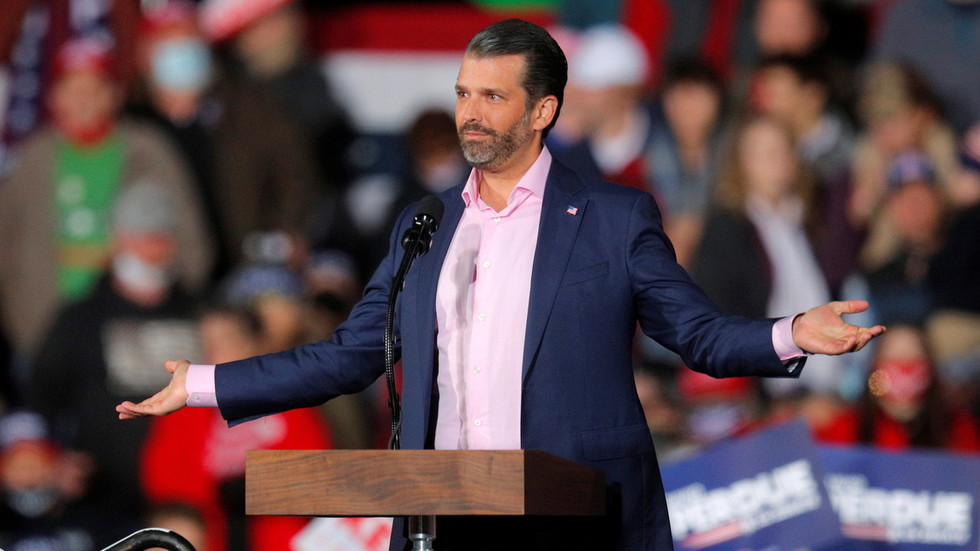 Don Jr. joins Telegram, says Big Tech can deplatform him ‘just like that’ at any time

Donald Trump Jr. has switched to Telegram as his primary social media, as he expects it to protect him from being silenced by the US tech giants in the same way they treated his father, former President Trump.

Don Jr. had a channel on Telegram held in his name by another person for a long time, but until Friday it was basically a bot reposting content from his other accounts, he explained in a video address announcing his migration. He said he agreed to take control and make it his main channel because other platforms don’t offer a level playing field for the marketplace of ideas.

I want a place where my ideas and their bad ideas are competing against each other.

“We gotta get away from the Big Three: the Twitter/Instagram/Facebook,” he said. “For all I know, I’ll wake up tomorrow and be done, literally gone off those platforms… They can pull it like that.”

The Telegram channel has gained some 250,000 new subscribers in the hours since the announcement.

The messenger deliberately doesn’t serve users a single scrollable feed with an algorithm deciding which content to put in it. Such algorithms are employed by competitors to introduce new creators to people, making an educated guess what would be to the users’ liking.

The approach leads to creating media bubbles, reinforcing people’s preconceived notions, and can be used to throttle content that the owner of the platform deems undesirable. Conservative commentators have been complaining for years that Silicon Valley is de facto censoring them by making their opinions less visible to the general public. Telegram creator Pavel Durov says a lack of algorithmic manipulation makes it more transparent and preserves its integrity.

Telegram experienced a surge of popularity this month amid US Big Tech tightening the screws on their platforms. Donald Trump’s social media accounts remained suspended in the last weeks of his presidency after he was accused of inciting his supporters to riot at Capitol Hill on January 6. Parler, a platform catering to conservative audiences, was wiped out in an apparently concerted effort by the tech giants.

US mainstream media then pinpointed Telegram as the supposed safe haven for extremists purged in the US. A US NGO even demanded that Apple remove the app from its store, as it had with Parler.

Anxiety about the amount of power wielded by US-based companies over political speech probably contributed to Telegram’s growth. But most of it came from Asia, according to Durov, with the US today representing just two percent of the Telegram user base. The platform did, however, ramp up its efforts to eradicate hate speech on public channels due to the events in the US.

Saudi Arabia imposes curfew due to coronavirus in Makkah and Madina

Taliban cracks down on 'costly' polygamy