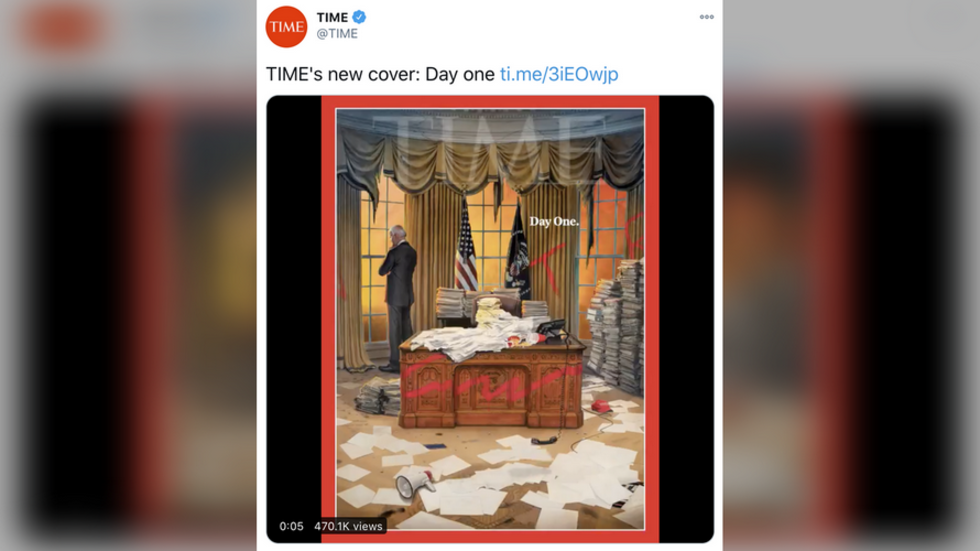 TIME magazine made its view of Joe Biden’s presidency clear with a new front cover depicting the president’s “day one” in an Oval Office that’s been vandalized as he looks out at a country on fire.

The image shows papers stacked and strewn about on the floor, a disconnected phone, and spray-paint vandalism across the room as Biden stoically looks out a window to see nothing but flames. On Twitter, the image also comes with the sound effect of the disconnected phone. Why the stoic Biden would not turn around and simply hang the phone up in case he gets a call is unclear.

“Is the Oval Office in Seattle? Did BLM-ANTIFA blow through there?” author Derek Hunter tweeted in reaction to Thursday’s cover, referencing left-wing protests by Antifa and Black Lives Matter that have turned to violence and attacks on businesses.

Is the Oval Office in Seattle? Did BLM-ANTIFA blow through there? https://t.co/PCHMPHXi4r

“Good luck being United when the mainstream media acts like a bunch of toddlers,” journalist Trish Regan wrote.

Others called the image out for flying in the face of Biden’s repeated calls for “unity” and showing a deep-seated bias in coverage, only one day into the Democrat’s term.

I’m not pro trump nor pro biden but i feel this is exaggeration and bias. He took the job and people expect better than this 😞

Biden and Vice President Kamala Harris have received glowing coverage from TIME before, with the two being named the magazine’s joint ‘Person of the Year’ in 2020.

In their latest cover story, writer Charlotte Atler opines about Biden leading a “country divided between Americans who believe in facts and Americans who distrust them. Between those who want a multicultural Republic and those who seek to disenfranchise nonwhite votes.”