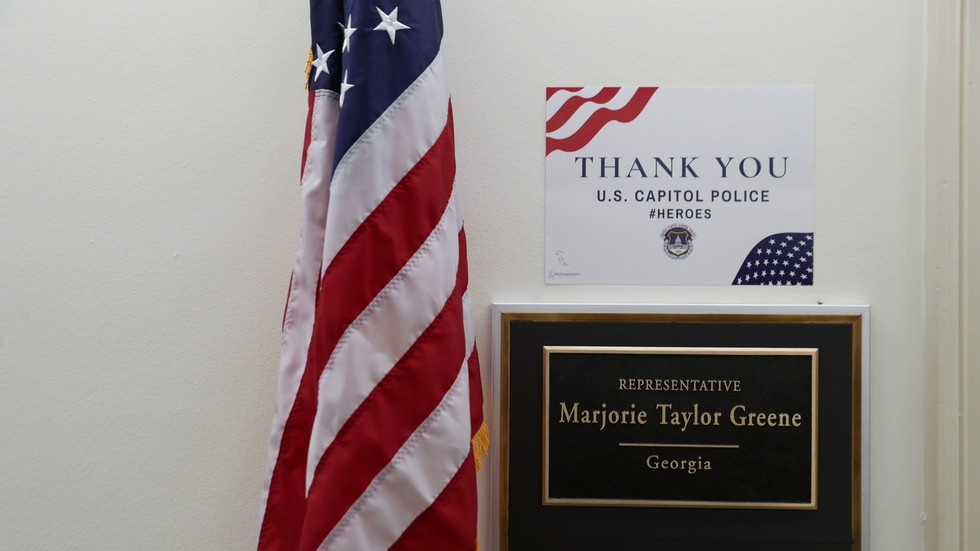 Democrats are demanding the GOP purge Georgia Congresswoman Marjorie Taylor Greene from two House committees over her supposed “inflammatory and false statements,” apparently with support of some Republicans.

“Reducing the future harm that she can cause in Congress, and denying her a seat at committee tables where fact-based policies will be drafted, is both a suitable punishment and a proper restraint of her influence,” Wasserman Schultz said in a virtual news conference.

Group of House Democrats introduce resolution in the House that would remove Rep. Greene from her 2 committee assignments as a consequence for her inflammatory and false statements. https://t.co/hzCNvNvPQN

The House Rules Committee will consider the resolution on Wednesday. According to unconfirmed reports cited by several mainstream outlets, House Democrats are trying to pressure the Republican leadership into censuring or expelling Greene themselves. One Democrat has already proposed to expel Greene from the House altogether – but that seems to be a tall order, since it would require a two-thirds majority.

While Taylor Greene has enjoyed the support of high-profile Republicans, including from former President Donald Trump, some GOP leaders have echoed Democrats’ criticism of the upstart congresswoman. In a scathing statement issued later on Monday, Senate Minority Leader Mitch McConnell called Taylor Greene a “cancer for the Republican Party,” saying she’s bought into “loony lies and conspiracy theories.”

“Somebody who’s suggested that perhaps no airplane hit the Pentagon on 9/11, that horrifying school shootings were pre-staged, and that the Clintons crashed JFK Jr.’s airplane is not living in reality,” McConnell told the Hill. “This has nothing to do with the challenges facing American families or the robust debates on substance that can strengthen our party.”

Greene, who ran unopposed in her Georgia district in November, has been a target of Democrat and media criticism ever since, accused of anything from sympathy to the “QAnon” conspiracy theory to wanting to “execute” Democrat leadership. Last week, the media accused her of claiming that the school shootings in Newtown, Connecticut and Parkland Florida were staged, and that 2018 wildfires in California were caused by “Jewish space lasers.”

Rep. Cori Bush (D-Missouri), a Black Lives Matter activist also elected in November, moved her office away from Greene’s last week, claiming the maskless colleague “berated” her in a hallway and “targeted” her on social media – as well as “incited insurrection,” for which she ought to be expelled. Greene responded with a video of the altercation that showed things unfolding a bit differently.

Bush’s reference to “insurrection” – as Democrats have chosen to describe the January 6 unrest at the US Capitol – suggests the clamor about Greene isn’t just about her social media posts from long before she was a member of Congress. She is an outspoken supporter of former President Trump, and filed articles of impeachment against President Joe Biden last month, to argue the Democrats’ use of the process against Trump was purely political.

The template for Greene’s ouster appears to be the January 2019 purge of Steve King (R-Iowa) after a New York Times article accused him of racism. Republicans were eager to denounce King back then. This time, however, there is no sign that the Democrats will stop with Greene.

Bush is one of many lawmakers – including the firebrand Alexandria Ocasio-Cortez (D-New York) – accusing Senators Josh Hawley (R-Missouri) and Ted Cruz (R-Texas) and some 147 Republican members of the House who dared raise the question about irregularities in the election of Joe Biden of “insurrection” and calling for their resignation or expulsion from Congress.

Multiple senators have acknowledged that Democrats are looking at the 14th Amendment – used to disenfranchise Confederates after the Civil War – as a tool against Trump and his supporters.

If you’re defending yourself against the things someone who hates you is saying about you, you’ve already lost.

7,893 People Get Jabs Against Coronavirus In Delhi

‘A big day for our family’: Khabib Nurmagomedov reveals he’ll be on Fight Island to help cousin Umar ahead of UFC debut