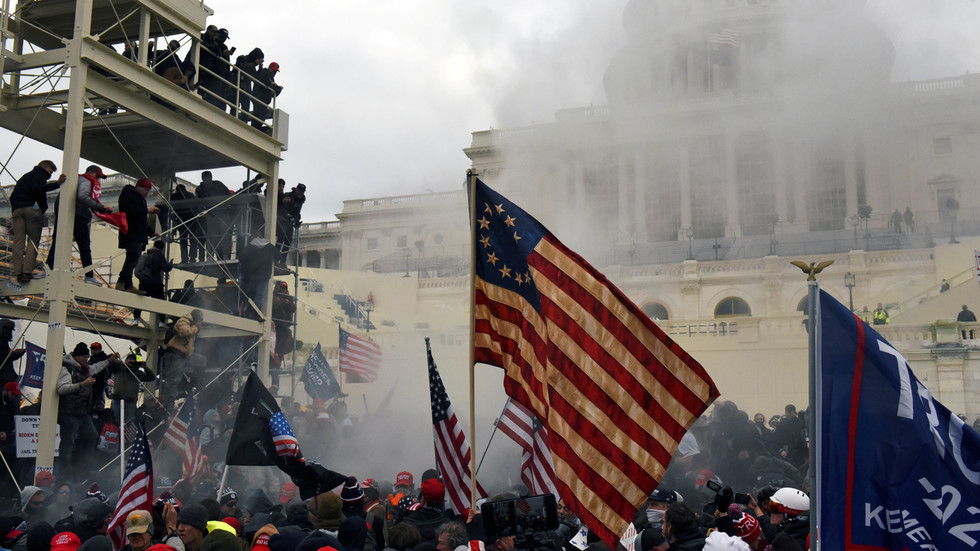 European leaders and NATO secretary-general Jens Stoltenberg have condemned the storming of the US Congress by supporters of President Donald Trump and called for Joe Biden to be confirmed as the new US leader.

“Shocking scenes in Washington, DC. The outcome of this democratic election must be respected,” Stoltenberg tweeted on Wednesday, as videos of protesters breaching the chambers of Congress and disrupting the joint session that was supposed to certify the 2020 election for Biden traveled around the world.

Shocking scenes in Washington, D.C. The outcome of this democratic election must be respected.

“Disgraceful scenes in US Congress,” British Prime Minister Boris Johnson chimed in. “The United States stands for democracy around the world and it is now vital that there should be a peaceful and orderly transfer of power,” added the British PM.

Disgraceful scenes in U.S. Congress. The United States stands for democracy around the world and it is now vital that there should be a peaceful and orderly transfer of power.

“Violence against American institutions is a serious attack on democracy. I condemn them,” tweeted French Minister of European and Foreign Affairs Jean-Yves Le Drian. “The will and vote of the American people must be respected.”

Other countries and organizations around the world used the opportunity to express concern and lecture the US on democracy as well. The Turkish Foreign Ministry said it was “following with concern” the events in DC, calling on “all parties in the US to maintain restraint and prudence.”

“We believe the U.S. will overcome this internal political crisis in a mature manner,” Ankara added.

The Organization of American States (OAS), which had backed the US challenges to elections in Venezuela and Bolivia, now said it “condemns and repudiates the attack against institutions” of the US.

”Democracy has as its fundamental pillar the independence of the powers of the State, which must act completely free of pressure,” said OAS secretary-general Luis Almagro. “The exercise of force and vandalism against the institutions constitutes a serious attack against democratic functioning.”

As tens of thousands of Trump supporters rallied in the US capital on Wednesday to protest the “stolen” election and pressure Congress not to certify Biden’s victory, several hundred peeled off and stormed the Capitol Hill complex.

Shots were fired as protesters clashed with police, and the lawmakers were evacuated as the joint session was interrupted.

Trump himself has denounced the violence, called on protesters to “go home” and ordered police and National Guard troops to restore order. Democrats and establishment Republicans alike have accused him of “inciting” the protesters anyway.

“This is not dissent, it’s disorder. It’s chaos, it borders on sedition, and it must end now,” Biden said from his headquarters in Delaware.

Ronaldo ready to defy age and ‘play many, many more years’ as 35yo Juve star finishes year with most goals in Europe’s big leagues

Covid: Israel vaccine fears 'out of context and inaccurate'

Bernie Sanders: ‘There is a path’ to defeat Joe Biden

Coronavirus: The misleading claims about an Indian remedy

India’s Next Phase Of Covid Likely To Be Localised Outbreaks: Experts