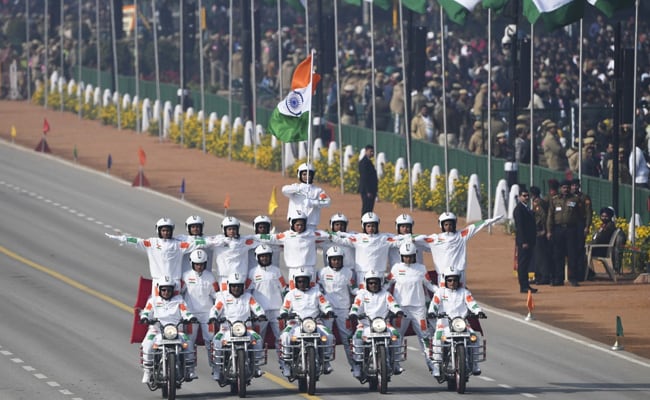 In view of Republic Day, multi-layered security arrangements have been made: Police

Ahead of Republic Day, the Delhi Police has stepped up security and intensified patrolling and verification drives across the national capital to thwart any untoward incidents, officials said on Friday.

The national capital is brought under an unprecedented ground-to-air security cover with thousands of armed personnel keeping a tight vigil for the Republic day celebrations on January 26, they said.

Security arrangements have been also been tightened at the border areas in view of the proposed tractor rally by farmers agitating against the centre’s new farm laws on January 26, police said.

According to the police, patrolling has been intensified in busy market areas. Group patrolling in heavy footfall areas and vehicle checking are also being carried out across the city.

Meetings are being taken at police station level to sensitise the security guards of various hotels, guesthouses and vital installations.

Combing drives and door-to-door survey are being undertaken in various areas across the city to avoid any untoward incident, a senior police officer said.

In view of Republic Day, multi-layered security arrangements have been made at busy market places across the city, police said, adding that regular announcements are also being done to alert public to report to the nearest police station in case any unidentified object or suspicious person is seen.

Deputy Commissioner of Police (Southeast) said in Central Market area of Lajpat Nagar, more than 20 commandos and Delhi police staff are deployed at each entry and exit points. Checking and frisking at each entry points has also been tightened and commandos with binoculars have been deployed at ”morchas” to keep vigil on every movement at the market.

“More than 50 security guards have also been deployed to keep watch on market area and to maintain law and order. Outer force is also deployed for the same. At least, 150 CCTV cameras have been installed in areas covering Veer Saverkar marg and Central Market. A keen watch is under surveillance by drones,” he said.

Special drives by anti-sabotage teams are also been conducted on a day-to-day basis to ensure the security and smooth functioning of the market, the officer said.

In southwest Delhi, the police have inducted 50 volunteers who will be its “eyes and ears” at the busy Sarojini Nagar market area to tackle terror threats, another senior police officer said.

Inducted in the “police service programme”, these volunteers are mostly shopkeepers and workers at the Sarojini Nagar market and will keep an eye on any suspicious activity, the officer said.

“In the eventuality of a terror attack, the group would help other shopkeepers in evacuating the market place. The volunteers know the corners of the market well and are familiar with the entry and exit points. They are also responsible for looking after the security during festivals,” said Ingit Pratap Singh, Deputy Commissioner of Police (Southwest)

Security guards and members of Delhi Police’s “eyes and ear” scheme” are also briefed to stay vigilant and alert.

Staffs deployed at pickets within and at border areas are also being briefed to stay vigilant. SIM card dealers, security guards are being sensitized and they have been told to inform police in case they find anything suspicious in their vicinity, he said.

Rémy Julienne: Stunt king to the stars who fell to Covid

Covid hand-outs: How different countries pay if you are sick

Ex-Civil Servants In Letter To Centre

Negative Coronavirus Report Must For Those Entering Gujarat