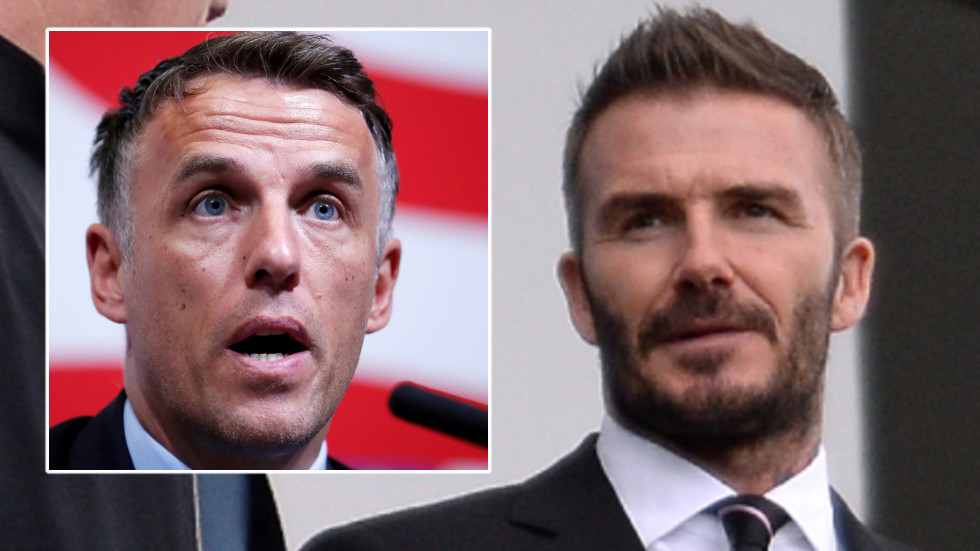 From Jose Mourinho to Frank Lampard, football managers have long received jobs based on ease and emotion rather than scrupulous reasoning. Why is David Beckham protesting at the idea that Inter Miami are continuing the tradition?

David Beckham seemed to have an unusually spiky demeanor at a press conference yesterday. The iconic midfielder was fielding questions about the new club he is the figurehead for, Inter Miami, appointing Phil Neville as their new manager.

Inter’s image typically holds the hallmark of Beckham’s long-established sheen, so it was as strange to see brand Beckham on the defensive as it must have felt to the co-owner himself.

“I’ve known him since I was 15, 16 years old, from a young kid,” Beckham briskly began, as if knowing Neville for 30 years would answer accusations of favoritism behind the decision.

“Of course, people are always going to turn around and say, ‘Oh, it’s because he’s your friend.’ It’s nothing to do with him being my friend. Our ownership group don’t just employ friends. We employ the best people.”

For the uninitiated, Neville spent 11 years as a senior player at United and eight at Everton before becoming the surprise incumbent of the England Women managerial vacancy in 2018.

🗣️ "Phil thinks about football every minute of every day. That is why he is a manager and I am not" @GNev2 speaks about Phil Neville's passion for football management which has seen him land the Inter Miami job with David Beckham pic.twitter.com/irNAsKgID5

Once the arguments about his suitability to be at the pinnacle of English women’s football had subsided – Neville had no previous experience as a number one – his record in the role was, by the high standards he often talked of, mixed at best.

Taking over the side who were third in the world rankings, Neville failed to win 16 of his 35 matches in charge, losing 11 and leaving them sixth in the standings.

England performed commendably by going toe-to-toe in a 2-1 defeat to the all-conquering USA in the 2019 World Cup semi-finals, but also won only one of their nine games against sides ranked in the top five under Neville.

Beckham – 'I didn't hire Neville because he's my friend' pic.twitter.com/09xA0ZazrJ

His abrupt departure once Inter moved in could conceivably have caused Neville and the country’s FA some relief: he had lost seven of his final 11 matches in charge, winning only three times.

Suffice to say, work ethic and human qualities will count for little for Neville or Beckham should that kind of form be repeated in Miami.

Beckham’s impassioned comments were heralded by a speech from Neville’s brother Gary, who was a teammate of his sibling and Beckham for United and England in their heyday.

What an absolute load of old twaddle – jobs for the boys – Neville would have got nowhere near the job of he wasn’t Beckham’s mate – Phil hardly has a glittering CV with lots of managerial success!!!

David Beckham says Phil Neville was hired because he was the best man for the job nit his friend.Yet when asked how many other candidates there were his response was " none " What tosh.
Phil will be back in the UK before Sarina Wiegman takes over his old job 🤣🤣🤣

Speaking on live TV in the UK, a meek mention of the half-jokey suggestion that Neville’s new post was a case of “jobs for the boys” was all Gary needed to set off on a stern rant about the hours he had seen him spend on his relatively new trade, as if an obsessive desire to gain an edge is not a given for any coach.

As counter-intuitive as it would doubtlessly seem to them, it would actually put less pressure on Neville – and elicit fewer groans from fans with even the most rudimentary knowledge of the flawed realities of how football hierarchies work – had his brother and Beckham kept relatively quiet.

Vacancy-filling in football has never been a meritocracy, and the soundbite beloved of boardrooms about appointing the best candidate for the job is as tired as the delusion that managers can expect patience without positive results.

"I'll say it more directly than David: Phil Neville was not handed the Inter Miami job. He earned the job. There was a very thorough interview process… as you may imagine, Inter Miami manager is an attractive position.”

😂 Anyone who's watched the Lionesses over the past two years knows that can't possibly be true!

There are countless examples to be had of marriages of convenience: at the richest club in the world, Manchester United, Ole Gunnar Solskjaer’s only previous experience outside of Norway had been a brief and unsuccessful spell at Cardiff before he was ushered in as an available club legend – and there are even murmurings that he may not have the necessary credentials to continue as boss under new requirements for football clubs following Britain’s departure from the EU.

Over in the Netherlands, Frank de Boer suffered quickfire sackings at Inter Milan and Crystal Palace before failing at Atlanta United.

This made him the ideal candidate, according to Dutch bigwigs, to take over the national side, and he rewarded their faith by becoming the first Holland manager not to win any of their first four games at the helm.

What club would look at Phil Neville's track record and general comportment in the England job and say, "THAT is our guy, that's the best choice to run our team." He'll probably get hired because he's in the fraternity and all, but… I don't see any overperformance on his part.

Those two cautionary tales would not make a more pragmatic response from Beckham an admission of poor judgement.

Gareth Southgate, who became England manager when the FA needed a quick solution after Sam Allardyce’s scandalized mini-reign, had previously led Middlesbrough to English Premier League relegation and finished bottom of the group stage with England Under-21s at the European Championships.

Largely because of results, Southgate, who is a contemporary of Neville, has become one of the most popular England managers in history.

It would be foolish to assume that Neville will not succeed, although he appears to have his work cut out judging by the team’s final position of 19th out of 26 teams overall last season, winning seven of their 23 matches.

The one element that Beckham can be forgiven for not mentioning, though, is his pal’s track record.

Inter’s ambassador-in-chief is new to the role of recruiter, and accepting that he was swayed by familiarity would be more credible than his strained protestations.

The concept of football boardrooms being rigorously subjective is a fine ideal to project. One day, it may even be true. In the meantime, Inter’s display of naivety only leaves them ripe for ridicule.