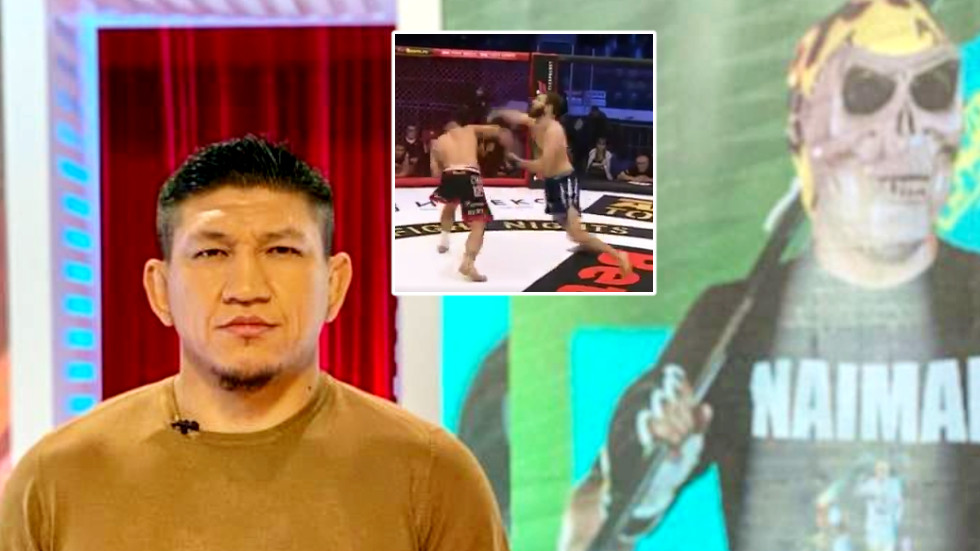 Kuat Khamitov, the MMA fighter facing charges after encouraging people to shoot down helicopters spreading coronavirus, has mimicked grave-digging after a savage 50-second KO of Maxim Panteleyev in his Russian opponent’s homeland.

Entering the ring in a ghoulish mask in Magnitogorsk, controversial Khamitov lived up to his menace by flooring late stand-in Panteleyev with the second of two hammer blows.

As the pained Panteleyev stayed grounded in a fight that some felt should have been called off even earlier, the fight was duly curtailed – allowing the celebrations to begin for the Kazakh.

Khamitov appeared to pretend he was fashioning a grave on the canvas, then leapt in to the imaginary opening to mark his 20th professional victory after catching Panteleyev flush on the chin.

who even was that guy.. that was a mismatch

The 32-year-old had seen scheduled opponents Magomed Magomedov and Aleksey Ilyenko pull out before Panteleyev agreed to take the fight at short notice against the man who was arrested in curious circumstances in September.

The heavily-followed welterweight used a video to advise people to target helicopters that he believed were responsible for the spread of the virus, also telling them to beat people attempting to sanitize from the disease “with sticks and stones” in a “war”.

Khamitov’s hearing has subsequently been postponed, and the case was not the only concern he faced on the way to a memorable, concussive victory.

“After my last fight, I had to have an operation,” he explained to sports.kz after the quickest ending of his 10-year fully-fledged career.

“But I learned that I was offered to perform here in Magnitogorsk – many Kazakhs live here.

“As a result, I put all illnesses and surgeries on pause and came here to perform and please the fans. But after the battle I have to endure three difficult operations.”

What a pandemic Christmas looked like around the world

Face and hand transplant patient: ‘I want to get back to normal living’

Viewpoint: From Ethiopia’s Tigray region to Yemen, the dilemma of declaring a famine