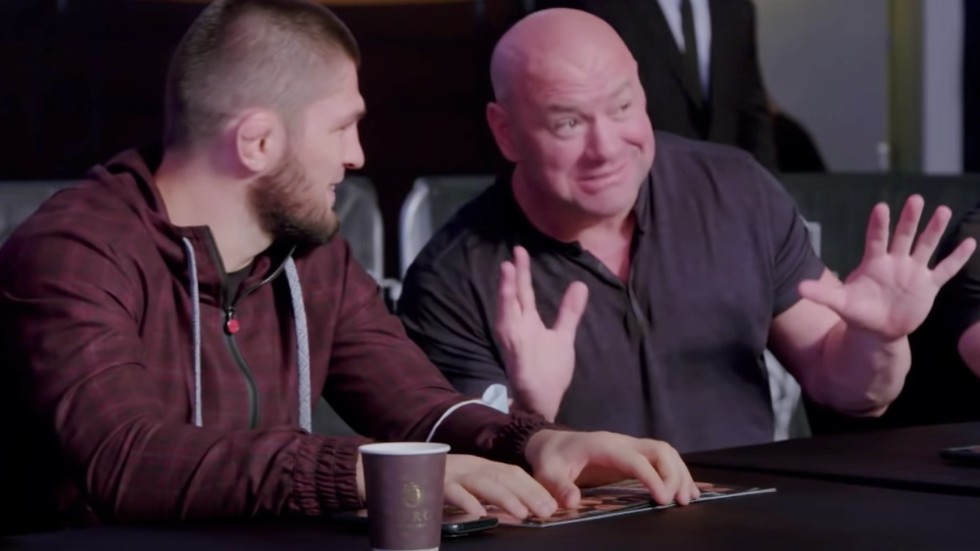 UFC president Dana White may be exuding confidence in his ability to convince Khabib Nurmagomedov to return to the octagon, but a recent clip of him talking to the Russian star could suggest otherwise.

White and Khabib met at last week’s UAE Warriors event in Abu Dhabi, where their infamous behind-closed-doors meeting was held.

But while White has boldly moved forward in the belief that he will successfully lure “The Eagle” back to the cage, his cageside chat with Khabib during the fights themselves looked much more like desperation than the actions of a man who already knew the Russian’s return is a done deal.

The exchange was captured as part of White’s UFC YouTube series, “Dana White Lookin’ For A Fight,” where the UFC president, teamed with former UFC stars-turned-coaches Matt Serra and Din Thomas, visit regional shows in their search for new talent to sign to the UFC, or offer opportunities with the Contender Series.

While the fights certainly offered plenty of fighting talent to excite the UFC president, it was clear that his main goal remained to lock up the fighting future of his most dominant champion.

“This fight with Poirier is trending bigger than the fight with you and Conor,” White told Khabib.

“Imagine what you and Conor would do in another f*cking fight. I’m just saying!”

Khabib’s response was simply to grin. With White clearly desperate to persuade him back, there seems little doubt that the 29-0 champ is holding all the aces if he did opt to negotiate his return.

‘If I see him, something will happen’: Khamzat Chimaev jokes UFC will need to ‘hide’ Conor McGregor from him on Fight Island

Brexit: What you need to know about the UK leaving the EU