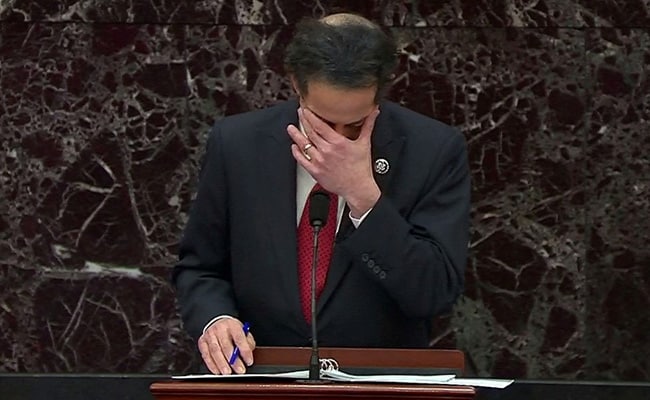 The leader of the Democratic team prosecuting Donald Trump’s impeachment trial welled up in tears on Tuesday as he recalled his 24-year-old daughter and son-in-law hiding in fear in the U.S. Capitol during the rampage by the former president’s supporters.

U.S. Representative Jamie Raskin, now in his third two-year term representing parts of Maryland and a constitutional law expert, was defending the legality of considering impeachment charges against a former president.

When he invited his family to witness the Jan. 6 joint session of Congress to certify Democrat Joe Biden’s presidential election victory, Raskin, 58, was also mourning the Dec. 31 death of his 25-year-old son.

He said his daughter had asked whether they would be safe visiting on Jan. 6, after hearing of plans by thousands of Trump supporters to descend on Washington to try to stop the normally routine proceeding.

“I told them, of course it should be safe. This is the Capitol,” Raskin said as he wrapped up his opening argument.

But when the mob breached the Capitol, in a violent assault that left a Capitol Police officer and four other people dead, his daughter Tabitha and other family members were left to huddle in an office off the floor of the House of Representatives.

Raskin said when he finally was reunited with his daughter and son-in-law, he apologized to them and promised things would be better on their next visit.

“And you know what she said? She said, ‘Dad, I don’t want to come back to the Capitol,'” the congressman recalled.

With the Senate’s 100 members pausing from their note taking and fiddling with papers on their desks, they locked onto Raskin as he spoke tearfully of his daughter’s fear.

At times barely able to speak, he wrapped up his opening statement to the Senate, saying, “Of all the terrible things I saw … that one hit me the hardest. That and watching someone use an American flag pole, the flag still on it, to spear and pummel one of our police officers.”

COVID-19 Pandemic Will Not Be The Last: WHO Chief