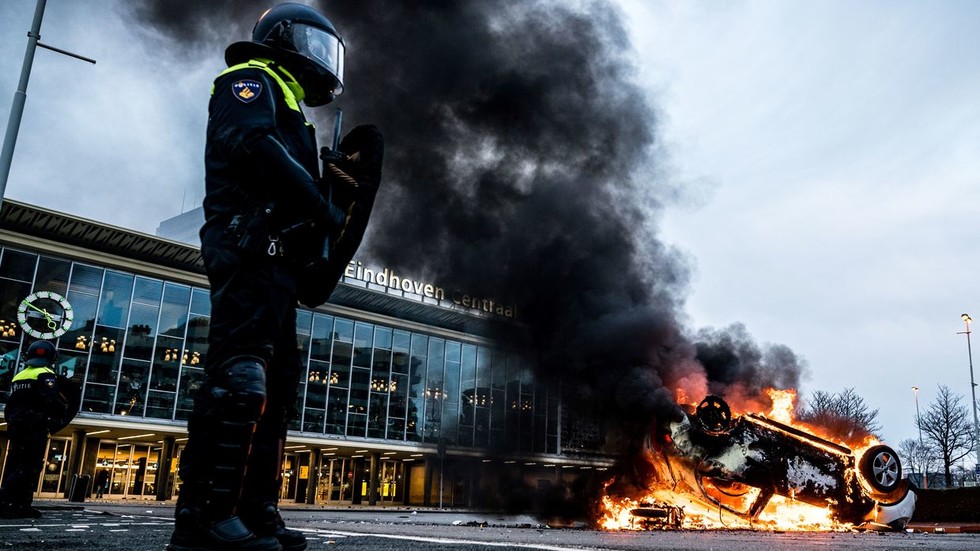 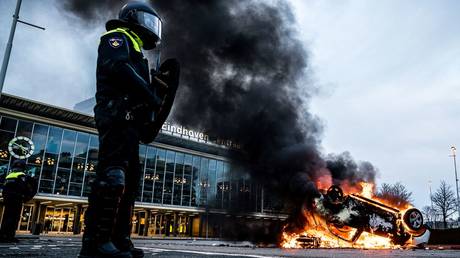 Some 240 people have been arrested as unrest spread to at least 10 municipalities across the Netherlands, with riot police using water cannons, batons, dogs and horses to break up unauthorized anti-lockdown gatherings and riots.

Police faced off with curfew-defying crowds in The Hague, Amsterdam, Eindhoven, Enschede, Stein, Oosterhout, Breda and elsewhere across the nation for the second day in a row on Sunday.

At least 190 people, including minors, were detained in Amsterdam alone, where some 1,500 protesters gathered at the central Museum Square, according to local media.

While most of the demonstrators were peaceful, some sitting on a field with their banners, authorities declared the entire gathering was illegal under the current Covid lockdown rules, and police forcefully dispersed it using water cannons and batons.

In Eindhoven, hundreds of protesters clashed with police, pelting fireworks and rocks at officers and police vans, while mounted cops charged the crowd and used tear gas against the demonstrators.

Meanwhile, a group of rioters in Enschede tried to smash windows at the Medisch Spectrum Twente, forcing the hospital to request additional security.

Anti-covid-measure rioters in the Dutch city of Enschede appear to have attacked a hospital. https://t.co/Jfqrq5xWKk

Later in the evening, multiple fires were burning in the streets of The Hague, with rioters reportedly setting a police motorcycle ablaze after forcing an officer to flee.

JUST IN – Violent anti-lockdown protests in several cities in the #Netherlands, protesters set fire to a police motorcycle in The Hague.pic.twitter.com/YSlLGFB5Iu

Project 17: ‘I was told to clean my own school toilets’

Russia’s oil output plunges to LOWEST in nearly a decade