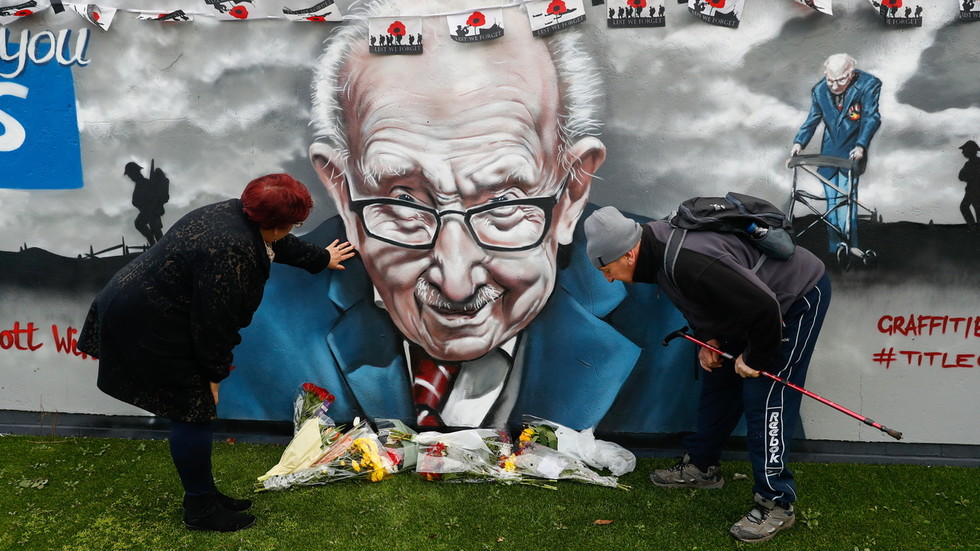 The Church of England is investigating one of its clergyman after he posted a Twitter message smearing fans of WWII veteran Captain Tom Moore, who died this week of Covid-19, as being part of a “cult of white British nationalism.”

The Rev. Jarel Robinson-Brown tweeted on Wednesday that he wouldn’t be taking part in a national clap to honor Moore, who died at the age of 100 after raising nearly 33 million pounds for the National Health Service in a fund-raising walk. “The cult of Captain Tom is a cult of white British nationalism,” Robinson-Brown said. “I will offer prayers for the repose of his kind and generous soul, but I will not be joining the national clap.”

Why does this Rev. @KingsCollegeLon thinks people celebrating Captain Tom is 'the cult of White British Nationalism'? Clap or not is a personal choice. But there is a difference between racist nationalism and people wanting to celebrate a kind and generous public figure. pic.twitter.com/3KnynCSkvT

The tweet was later removed amid a public backlash, demonstrating that there’s apparently still some limits on the acceptable bounds of bigoted wokeness. Robinson-Brown apparently deleted his Twitter account, which he had called “black prophetic fire.” Robinson-Brown issued an “unreserved apology for the insensitive timing and content of my tweet regarding the clap for Captain Tom.”

The Diocese of London said a review of the clergyman’s actions is underway, as the church expects its representatives to ensure their online activities are in line with its guidelines and “built on truth, kindness and sensitivity to others.” Removing the tweet and apologizing “does not undo the hurt he has caused, not least to Captain Tom’s family,” the diocese said on Thursday, but it added, “Nor do Jarel’s actions justify the racist abuse he is now receiving.”

A Statement from the Diocese of London pic.twitter.com/VzaJXKnWQS

However, people angered by Robinson-Brown’s message said it was he whose words were racist. “This man is a bigot and should not be a representative of the church or anything else, for that matter,” conservative commentator Patricia Page said. She urged people to sign an online petition that has been started calling for the church to fire Robinson-Brown.

This man is a bigot & should not be a representative of the Church or anything else for that matter.

Church of England : Remove Jarel Robinson-Brown from his post at C of E for insulting Sir Captain Tom's cause – Sign the Petition! https://t.co/ShCnYmws8V via @UKChange

Ian Collins says Reverend Jarel Robinson-Brown “is a race baiting fool” after the clergyman condemned the commemoration of Captain Tom Moore as "a cult of White British Nationalism".

Prime Minister Boris Johnson called for Wednesday evening’s clap for Moore as a way to honor both the WWII veteran and the NHS workers for whom he raised money. Moore was so popular that at least 10 petitions were started calling for a state funeral. Others have called for erecting a statue in his honor or burying him at Westminster Abbey.

Robinson-Brown, 29, listed such interests as “liberation theology” and “queer theology” in his since-deleted Twitter bio. The self-described “activist” said he was “passionate about issues of justice, particularly in the areas of race and sexuality.”

The clergyman reportedly has a history of controversial comments, including calling Britain’s honours system a tribute to “white supremacy” and making a reference to “ignorant white Christian men.” Robinson-Brown also once wished “a blessed Sunday to everyone except Boris (Johnson), Priti (Patel, home secretary) and all other oppressors.”

He said last month that the current UK government wants poor and homeless people to die from the pandemic. In November, when Jamaica was struck by tropical storms, Robinson-Brown said Jamaicans should “build a device to direct all the floodwater to Britain tbh because these landslides and severe flooding are the legacy of colonialism and poor infrastructure.” Even amid the backlash over his “Cult of Captain Tom” tweet, he “liked” a post saying that “if it’s going to come as a shock every time a priest says people shouldn’t worship false idols, we’re going to run out of pearls to clutch at pretty soon.”

Nevertheless, despite his penchant for controversy, Bishop of London Sarah Mullally last month appointed Robinson-Brown to serve in a prestigious post at the parish of All Hallows-by-the-Tower, an ancient church in the City of London, the Sun newspaper reported.

London on lockdown for Xmas? Apparently not a problem for clients of private jet services, as surge in booked flights reported