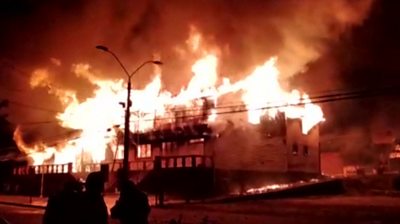 Protests have broken out in southern Chile after footage emerged of a police officer shooting dead a street performer.

Public buildings in Panguipulli were set alight and people also took to the streets of the capital, Santiago, to express their anger.

Interior Minister Rodrigo Delgado has condemned the arson but said justice would be served in the shooting.

Pussy Riot: Russian protests are 'battle for hearts and minds'

Glacier Breaks In Uttarakhand, Leaves Behind Trail Of Death, Destruction