Home > WORLD > ‘Careful what you wish for’: Trump WARNS BIDEN 25th Am. ‘will come back to haunt him’ in Texas rant on ‘free speech under threat’ 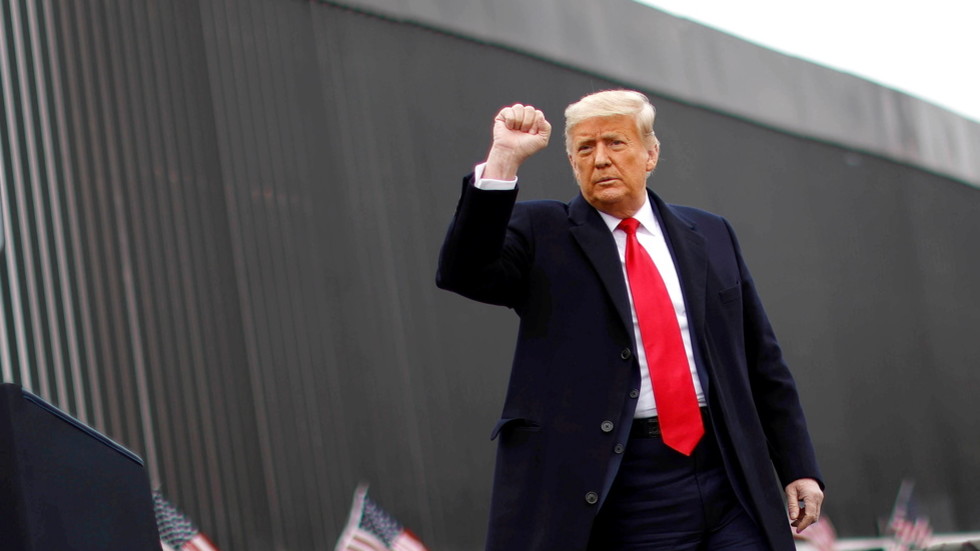 ‘Careful what you wish for’: Trump WARNS BIDEN 25th Am. ‘will come back to haunt him’ in Texas rant on ‘free speech under threat’

In a speech at the border wall in Alamo, Texas, blasting the Democrats’ impeachment efforts, President Trump has claimed that the 25th Amendment won’t oust him from office, but could “come back to haunt” Joe Biden in future.

With impeachment articles against him set to hit the House floor this week, and with House Speaker Nancy Pelosi pushing for Trump’s cabinet to use the 25th Amendment to remove him from office on grounds of unfitness, President Donald Trump was defiant during a visit to the US-Mexico border in Texas on Tuesday.

“The 25th amendment is of zero risk to me, but will come back to haunt Joe Biden and the Biden administration,” Trump told reporters. “As the expression goes, be careful what you wish for.”

TRUMP: “The 25th Amendment is of zero risk to me but will come back to haunt Joe Biden and the Biden administration. As the expression goes, be careful what you wish for…Respect for law enforcement…is the foundation of the MAGA agenda. And we're a nation of law and…of order." pic.twitter.com/mNODsK0GCi

As Trump spoke, the Democrat-controlled House of Representatives prepared to vote on a resolution calling on Vice President Mike Pence to trigger the amendment and oust Trump. If the resolution fails, the Democrats will bring articles of impeachment to the floor, accusing Trump of “incitement of insurrection,” after his supporters forced their way into the US Capitol in Washington, DC, last Wednesday.

Trump’s remarks seemingly implied that Republican lawmakers could use the same move on Joe Biden should they retake Congress in 2024. Pelosi herself sought to make the process easier back in October when she introduced a bill that would create a commission that could determine a president’s fitness for office and remove them if necessary.

During his speech on Tuesday, Trump also dismissed the latest impeachment effort against him as a “continuation of the greatest witch hunt in the history of politics.”

However, Trump also acknowledged that Biden would soon take office, and warned of the supposed consequences of rolling back his administration’s immigration restrictions. Should border controls be relaxed, Trump warned of a “tidal wave” of illegal immigration.

Trump’s speech was his first address to the public since he was banished from every major social media platform following the events on Capitol Hill. Trump did not complain at length about the ban, but declared that “free speech is under assault like never before.”