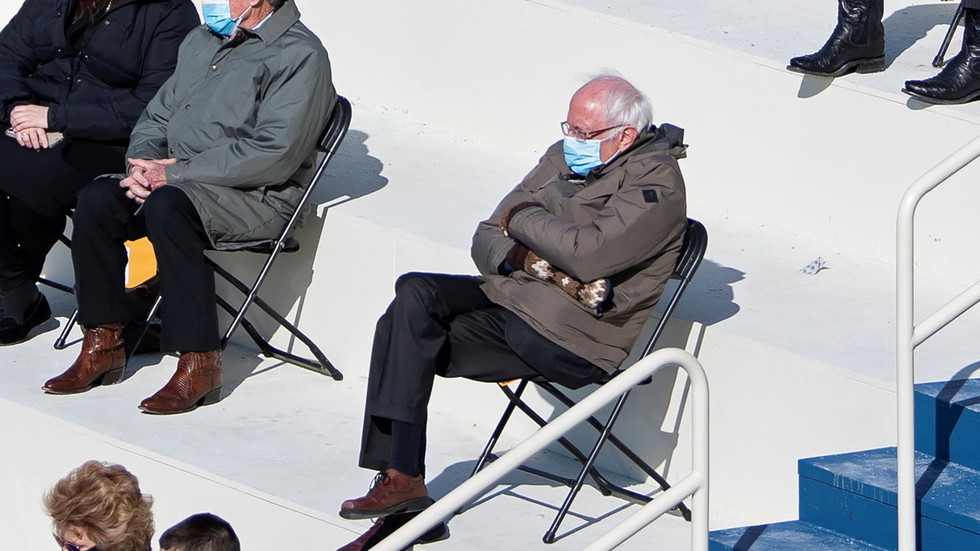 Progressive godfather Bernie Sanders has been cancelled and is now, according to a San Francisco journalist and teacher, the embodiment of “white privilege,” all because he wears meme-able mittens, or something.

Few people would associate Bernie Sanders with “white supremacy.” An elederly Jewish progressive whose ill-fated presidential campaign last year promised to build a left-wing “multi-generational, multi-racial coalition,” the Vermont senator is about as far from the prototypical skinhead as it’s possible to be.

Not so for Ingrid Seyer-Ochi, a high school teacher (that’s right, she shapes the youth of America) and San Francisco Chronicle columnist. In an op-ed on Saturday, Seyer-Ochi argued that Sanders “manifests privilege, white privilege, male privilege and class privilege.”

By turning up to Joe Biden’s inauguration in a puffy jacket and mittens, her argument went, Sanders didn’t show the appropriate respect to Joe Biden and Kamala Harris. Why Biden – who has worked with segregationists in the Senate, voted for the Iraq war, and authored a draconian crime bill that incarcerated masses of African-Americans – was given a pass is of course left unsaid.

Seyer-Ochi was furious that the torrent of memes inspired by Sanders’ fusty dress sense distracted her students from the “meaning of the day,” from the women present at the inauguration, and from “the female warriors inspiring these women, the colors of their educational degrees and their monochromatic ensembles of pure power,” whatever that all means.

“What did I think my students should see?” she asked, “a wealthy, incredibly well-educated and -privileged white man, showing up for perhaps the most important ritual of the decade, in a puffy jacket and huge mittens.”

Seyer-Ochi’s article provoked outrage online. “What a stupid and appalling article: all based on how Bernie dressed,” journalist Glenn Greenwald tweeted. “As stupid and gross as it is, it represents a large and growing sector of left-liberal thought.”

Jesus, do they not have editors at @sfc_opinions? This column denouncing Bernie-mittens as white privilege makes Thomas Friedman read like Tolstoy. https://t.co/VtC8YNRpSO

San Francisco liberals live in ethnically-cleansed gentrified neighborhoods with rents no working-class person of any race can afford but pretend that wearing mittens when it's cold is doing a white privilege in order to displace their culpability. https://t.co/RnektEasEV

What fresh hell is this take, I don’t even understand. The dude wore mittens and a big coat because it was cold and then he turned around and raised a ton of money for charity https://t.co/q3oWVLxU6e

one of the stupidest op-eds I've ever read (and I used to read Turkish newspaper op-eds). https://t.co/eRki5TILyf

The article wasn’t the first time that the mainstream media associated Sanders, who had relatives murdered in the Holocaust, with the forces of racial bigotry. Last February, MSNBC host Chris Matthews compared the elderly socialist’s performance in the Nevada caucuses to Adolf Hitler’s World War II invasion of France, enraging his supporters. At the same time, they also found time to brand Sanders, who looked set to beat Joe Biden to the Democratic Party’s nomination, a “communist” and “Russian stooge.”

While Sanders’ inauguration appearance may have infuriated Seyer-Ochi, the Vermont senator managed to spin it into a positive for nearly everyone else. By selling sweatshirts with the image of a mittened and jacketed Sanders on them through his website, the progressive lawmaker managed to raise nearly $2 million for a range of Vermont charities, including Meals on Wheels.

Seyer-Ochi, meanwhile, earned more than $123,000 in 2017 to complain about Sanders’ privilege to children.

Fauci flip-flops again, says there's NO DATA to indicate that wearing multiple masks is beneficial in fighting spread of Covid-19

No reason to worry? WHO says new Covid-19 strain found in UK is no deadlier & only slightly more infectious than others

Alexei Navalny: What happened when he returned to Russia?