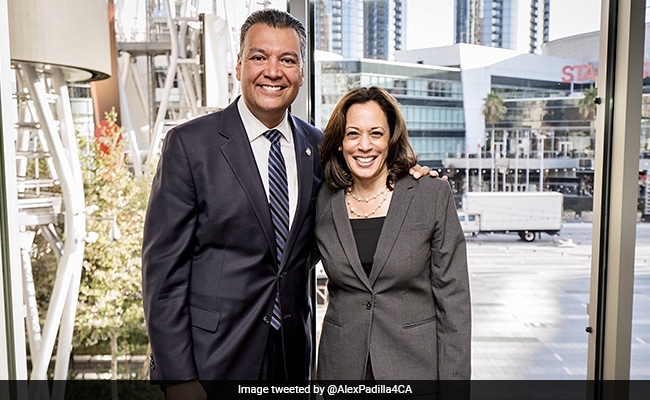 Alex Padilla will be the first Latino to represent California in the nation’s upper house.

Alex Padilla was named Tuesday as Vice President-elect Kamala Harris’ replacement in the US Senate, becoming the first Latino to represent California in the nation’s upper house.

Padilla, the son of Mexican immigrants who became California’s first Latino secretary of state in 2015, was selected by Governor Gavin Newsom to represent a state that is around 40 percent Hispanic.

In a statement, Padilla pledged to “work each and every day to honor that trust and deliver for all Californians.”

“We will get through this pandemic together and rebuild our economy in a way that doesn’t leave working families behind,” he added.

Padilla’s appointment as the Golden State’s junior senator ends months of intense lobbying among Californian Democrats for the coveted position, which Harris will vacate before next month’s inauguration.

Padilla — who oversaw California’s massive vote-by-mail operation in November’s general election — is a longstanding ally of Newsom and had been seen as a frontrunner for the seat, with strong support from Latino groups.

The son of a cook and a house cleaner who grew up in a gang violence-afflicted neighborhood of Los Angeles, Padilla — who is 47 — briefly worked as an engineer writing software for satellites, before entering politics at a time of intense anti-immigrant rhetoric in California.

“Alex Padilla worked his way from humble beginnings,” said Newsom in a statement describing Padilla as “a warrior for voting rights and the American Dream.”

“Through his tenacity, integrity, smarts and grit, California is gaining a tested fighter in their corner who will be a fierce ally in (Washington) DC, lifting up our state’s values and making sure we secure the critical resources to emerge stronger from this pandemic,” he added.

California’s other US Senate seat has been occupied since 1992 by Dianne Feinstein, for whom Padilla once worked as a junior assistant.