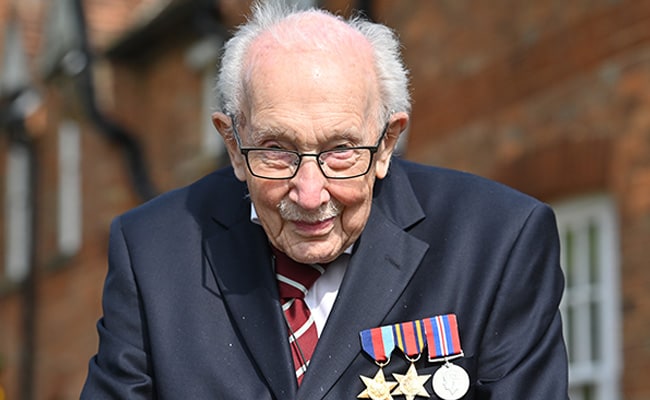 Captain Tom Moore, 100, who won British hearts with a Covid-19 fund raising drive, was hospitalised on Sunday with the virus, his family said.

Moore raised millions of pounds for charity by walking around his garden and then became the oldest man to top the UK music charts with a cover of “You’ll Never Walk Alone”.

“Over the last few weeks he was being treated for pneumonia and last week tested positive for Covid-19,” Moore’s daughter Hannah Ingram-Moore said on Twitter.

“He was at home with us until today when he needed additional help with his breathing,” she explained, adding that “he is being treated in a ward although he is not in ICU”, or an intensive care unit.

Moore was admitted to hospital in Bedford, central England.

The BBC quoted a spokesman for the family as saying that he had not yet been vaccinated for the virus owing to his pneumonia.

Part was raised by circling his garden 100 times with his walker just before his 100th birthday on April 30, 2020, when he was given the honorary rank of colonel.

He then recorded “You’ll Never Walk Alone”, a US show tune best known as the anthem of the Liverpool Football Club, which shot to number one in the charts.

On Sunday, British Prime Minister Boris Johnson tweeted: “You’ve inspired the whole nation, and I know we are all wishing you a full recovery.”

Moore, affectionately known as “Captain Tom”, was knighted by the Queen in July and has become a role model in a nation hit by the worst Covid-19 death count in Europe, now at more than 106,000.

Railrestro To Resume Food Delivery In Trains From Today