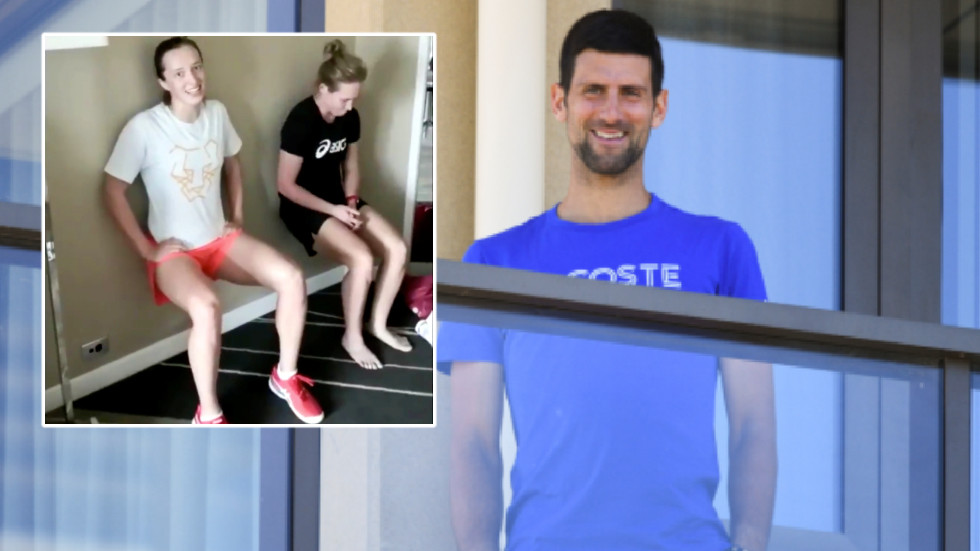 The world number one could have saved himself a slating by not raising seemingly valid points about how to make life easier for players. Some of their experiences so far show that he was, at least, entitled to ask questions.

As the anniversary of Novak Djokovic’s emotional win at the 2020 Australian Open approaches, his words on the day and experience out on Melbourne Park seem as distant as the prospect of packed crowds around the Rod Laver Arena in this strangely straitjacketed version of the showpiece that is about to begin.

Basking in the adulation of edging past Roger Federer’s total of 19 to claim the most Grand Slams ever won by a male player, Djokovic spoke movingly of an upbringing – “I came from literally nothing,” he said – that had helped him to find an extra gear in a grueling final against Dominic Thiem.

“This is a reminder that we should stick together more than ever,” Djokovic implored in his winning speech, telling 15,000 people and the watching world of his heartache at the horrifying Australian bushfires while paying tribute to NBA legend Kobe Bryant days after the tragic death of his friend.

“Stay close to the people who love you. There are more important things in life.”

The bittersweet glaze that those sentiments have been given by a year that Djokovic could never have predicted in his wildest visions makes them seem almost prescient now.

The frivolity of his Adria Tour during a pandemic the world was still learning about gave way to sorrow and scathing words as the tournament brought about brutal consequences, leaving his detractors to gleefully pounce when he was abruptly ousted from the US Open in an incident that will inevitably become iconic in tennis history.

Then there was more controversy around a fresh tantrum in Rome, accusations of divisiveness as he discussed a new players’ union and, this week, a new scandal after he was said to have made diva-style demands of Australian Open boss Craig Tilley, igniting sensitivities around Covid-19 measures and unleashing an unedifying row about the supposed disconnect between top players and the rest of the world.

Two stars with less right than most to the moral high ground, UFC provocateur Conor McGregor and tennis trash-talker Nick Kyrgios, swooped in to take aim – McGregor arguing that players should be pleased they can play at all, Kyrgios labeling Djokovic a “tool” in a predictably antagonistic missive.

While Djokovic’s adoring fans defended him, even his most ardent of followers must occasionally wish the Serb hero would avoid putting his head above the parapet so often – if only because of the sheer volume of scattergun abuse he receives whenever he does.

True to form, a dismayed Djokovic then produced a lengthy response to his latest round of rebukes, essentially saying that he had drawn upon his experiences as a lower-ranked player to drive himself on and make a well-intentioned plea for their welfare now that he has, as he accepted, “privilege”.

As is so often the case with stories chiefly circulated by the faux-outraged, the nuances of the discussion were lost.

Most notably, Djokovic’s exchange with Tilley was described as a list of “demands” – and there is a chasmic difference between that assessment and, as Djokovic describes it, an email suggesting some measures that could make life easier for players.

Djokovic is, by now, as easy a target as a ball dropping gently from the sky in front of a court left open by a generously indifferent opponent.

As the former head of the ATP player council and the most prominent player at the tournament, though, why should it be such a scandal for him to at least explore whether the best interests of his fellow professionals are being met?

A look at the list of points up for discussion hardly yields a whirlwind of extravagances. They included the possibilities of proper food, reducing days in isolation via more testing, permission to visit a coach after a negative test, allowing players and coaches to be on the same hotel floor and moving players to private houses with a tennis court.

The reality might not be a headline writer’s dream, but those do not resemble an unreasonable list of topics as part of an entirely sensible attempt to take a well-rounded view of player welfare.

“I was aware that the chances were low that any of our suggestions would be accepted,” added Djokovic, sounding increasingly like a man who wished he had simply continued training rather than dared to engage in conversation with organizers adjusting to a year like no other at the tournament.

It seems all the more justified given the faintly farcical stories emerging from several players in the far than ideal accommodation provided this week.

On Tuesday, Roberto Bautista Agut described the conditions as “jail but with WiFi” and spoke of the mental test it was providing him with.

The world number 13 later apologized for the comments, and Kazakh star Yulia Putintseva even held up a board appealing for players to be allowed more air.

Others have been pictured working out by lifting chairs and hitting balls against mattresses and walls. Humor, for many, is a way around the saga, but there should be no shame in elite athletes feeling frustrated by such limitations, and there is no harm in Djokovic asking some of the questions he claims they have posed in a group chat.

Looking back now, the furore around last year’s final encapsulated Djokovic. He had appeared to tell the crowd to “shut the f*ck up” before his post-match plea for unity, and later apologized for touching the umpire’s foot and telling him that he had made himself “famous” for punishing him over a time violation.

When he shouted and broke a racket in Rome, he admitted that he would “probably do it again”, explained that it was a release of anger and encouraged young players not to follow his lead, concluding: “Of course, I’m not perfect and I’m doing my best.”

Djokovic knows that a backlash is the price he pays for wearing his heart on his sleeve. Of all the imperfect moves he makes, looking out for his peers is not one he should be berated for.

Ottman Azaitar: Unbeaten Moroccan star KICKED OUT of UFC on the eve of UFC 257 after BREAKING safety protocols on Fight Island