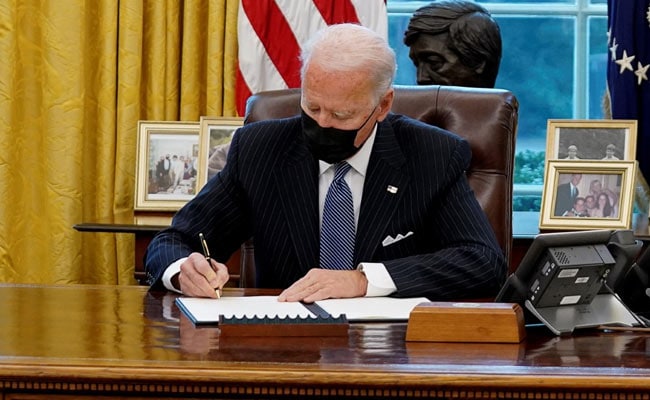 Joe Biden alleged that under his predecessor were more inaccessible (File)

US President Joe Biden has signed two healthcare executive orders which he said were to undo the damage done by his predecessor Donald Trump.

The first executive order was about restoring the Affordable Care Act and Medicaid to the way they were before Trump became president.

Biden alleged that under his predecessor, they were more inaccessible, more expensive and more difficult for people to qualify for either of those two items.

The second executive order was about protecting women’s health at home and abroad.

“It reinstates the changes that were made to Title 10 and other things, making it harder for women to have access to affordable healthcare as it relates to their reproductive rights,” he told reporters at the White House on Thursday.

“It has been a busy week, and I have signed executive orders tackling COVID-19, the economic and climate crises, as well as advancing racial equity. But, today, I’m about to sign two executive orders that are basically, the best way to describe them, to undo the damage Trump has done,” Biden said.

“There’s nothing new that we’re doing here, other than restoring the Affordable Care Act and restoring the Medicaid to the way it was before Trump became President, which by fiat he changed — made more inaccessible, more expensive, and more difficult for people to qualify for either of those two items: the Affordable Care Act or Medicaid,” he said.

Responding to a question, Biden said that the first thing his administration has got to do is get the COVID-19 package passed by Congress.

The White House said that the Biden-Harris administration will re-open enrolment to the Health Insurance Marketplace, take additional steps to strengthen Medicaid and the Affordable Care Act, and protect women’s health.

“These actions demonstrate a strong commitment by the Biden-Harris administration to protect and build on the Affordable Care Act, meet the healthcare needs created by the pandemic, reduce healthcare costs, protect access to reproductive healthcare and make our health care system easier to navigate and more equitable,” it said.

“For Biden, this is personal. He believes that every American has a right to the peace of mind that comes with knowing they have access to affordable, quality health care,” the White House said.

Because of the Affordable Care Act, over 100 million people no longer have to worry that an insurance company will deny coverage or charge higher premiums just because they have a pre-existing condition.

Roughly 20 million additional Americans obtained the security that comes with health insurance, and young people transitioning from school to a job can stay covered by their parents’ plan until age 26, it said.

Through his second presidential order, Biden aimed at protecting and expanding access to comprehensive reproductive healthcare.

The memorandum reflects the policy of the Biden-Harris administration to support women’s and girls’ sexual and reproductive health and rights in the United States, as well as globally.

Like memoranda issued by previous presidents Bill Clinton and president Barack Obama before him, it immediately rescinds the global gag rule, also referred to as the Mexico City Policy, which bars international non-profits that provide abortion counselling or referrals from receiving US funding.

In recognition of the additional work necessary to protect access to reproductive healthcare, President Biden’s memorandum also directs the Department of Health and Human Services to take immediate action to consider whether to rescind regulations under its Title X family planning programme.

No Meaningful Outcome Of Talks With China On LAC Standoff: Rajnath Singh