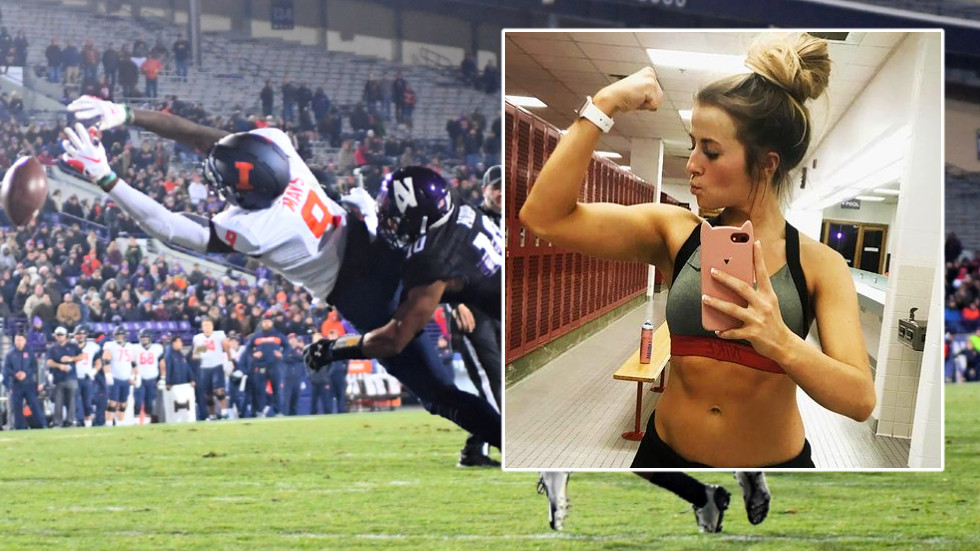 A cheerleader and beauty pageant contestant has reportedly filed a lawsuit against a university in the US, claiming that dancers at football games were “presented as sex objects” to “titillate” men who made advances towards them.

2019 Miss Nebraska entrant Hayden Richardson is said to have launched a 58-page federal suit against Northwestern University, where she said she had been groped by sozzled fans and alumni during university events and alleged that female cheerleaders had been told by the team’s head coach to “mingle” with powerful figures.

After sending in videos of her stunts, Richardson was accepted onto the squad when she transfered to Northwestern in 2018, only to be given guidance on “dealing with creepy fans” by head coach Pam Bonnevier, according to the Chicago Tribune.

“At every home game, the cheerleaders were instructed to walk around the tailgating lots, unsupervised in their skimpy cheerleading uniforms,” the outlet reported the lawsuit as saying.

Congratulations to @NU_Cheerleading's Hayden Richardson for being selected as a 2020 Truman Scholar. The prestigious @TrumanApp award will support her postgraduate education.

“They were expressly told to split up and mingle with extremely intoxicated fans alone and were not provided any security.

“It became clear to [Richardson] that the cheerleaders were being presented as sex objects to titillate the men that funded the majority of Northwestern’s athletics programs.

“After all, the happier these men were, the more money the university would receive from them.”

Richardson is said to have alleged that older men touched her breasts and buttocks over her uniform, picked her up without her consent and made “sexually charged comments” about her appearance, as well as offering her alcohol when she was underage or asking to meet her later.

The lawsuit said that students were instructed to take photos with fans even if they behaved badly and raised concerns about the university’s speed and approach to dealing with complaints.

Bonnevier, who no longer works for the university, was named as a defendant alongside the institution and three other employees.

Richardson was cited as standing to lose almost $10,000 in scholarships through the team by potentially leaving the team, as well as being required to pay back expenses amount to between $2,000 and $4,000.

The 22-year-old is seeking damages for emotional distress and lost career and learning opportunities.

“This is not the highlight, by any means, of my life or time at Northwestern but it is certainly the most impactful,” she told the Tribune.

“While there have been extreme detriments and times where I was very sad and hurt by the actions of the university, I am here, I am bringing the lawsuit forward and I’m going to do what is necessary to ensure other young women don’t experience the same thing that I did.”

Bonnevier is also said to have sent some cheerleaders to a private space for “elite ticket holders” near the stadium in a move that male students were apparently not required to make.

The lawsuit said that male fans offered her shots of alcohol and made remarks including “you and I will have fun together tonight”, while one fan allegedly picked Richardson up, touched her backside and didn’t put her down until after a photo was taken.

Female cheerleaders were ordered to “be especially attractive” at alumni events, according to the documents, and were “forced to dress in their tiny cheerleading uniforms to parade around men old enough to be their fathers and even grandfathers.”

Bonnevier is alleged to have barely responded to Richardson’s concerns, leading to her disclosing the issues to the team doctor and meeting with the associate athletic director for marketing, who told her to gather “testimonials and evidence”.

When Richardson provided anonymous “letters and testimonials” from teammates, she alleged she had been accused of fabricating the documents.

Bonnevier allegedly required “training” in April 2019, and an official probe is said to have been launched a year after Richardson’s initial complaint, which she said she had not been kept up to speed with.

In November, Richardson was told that “steps” were taken to address the situation, the lawsuit says, but no “specifics” were provided.

“We were really expected to look pretty and to engage with fans even if they were belligerent or drunk,” the 23-year-old said. “We were sent on our own… no supervision whatsoever.”

The Tribune said that the 2018/19 contract for cheerleaders had banned them from wearing braids and advised them not to “cut or color hair without checking with the coach”.

The lawsuit said that participants were “constantly told that they were not attractive or skinny enough.”

The university contacted Carter in June 15, saying that it had “recently learned that you may have experienced or witnessed concerns… in the context of the NU cheer team.”

Richardson received a prestigious scholarship of up to $30,000 in 2020 and is hoping to attend law school, having been rejected by three schools while awaiting responses from seven others – including Northwestern – according to the lawsuit.

“Unfortunately I was studying for my [qualification] when all of this was unfolding with my team,” she said.

“It’s very upsetting to me that it has detracted from my future plans and ability to progress.”

The Tribune said that it had unsuccessfully tried to reach Bonnevier by phone, email and social media on Friday.

In a statement, Northwestern insisted it was “committed to fostering an environment in which all members of our community are safe, secure and free from discrimination or harassment of any form.”

A spokesman added that “reports of discrimination or harassment are confidential in order to protect the individuals involved”, preventing the school from confirming “details that have been made public regarding any allegation or investigation.”

“One of the most rewarding experiences I have had during my time at Northwestern has been my time as a cheerleader,” she wrote almost two years ago alongside a photo of herself smiling in her uniform.

“I have had made absolutely lifelong friends, including my roommate, and because of this a severe heart defect was found and repaired, which quite possibly have saved my life.

“Thank you to the admissions committee who took a chance on me and made me one of the four percent accepted. I hope I am making you proud.”

Face and hand transplant patient: ‘I want to get back to normal living’

Meghan and Harry: Questions the US had about Oprah interview

NASA’s Mars Copter Flight Could Happen As Soon As Monday

Indianapolis FedEx shooting: Who were the eight victims?